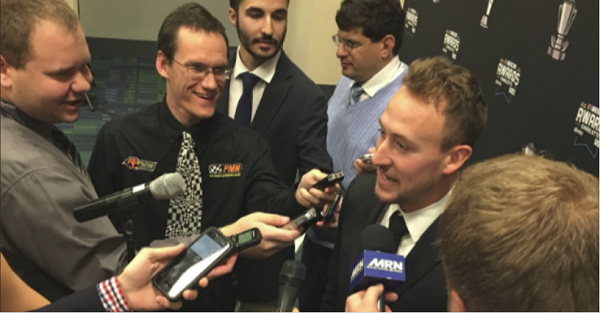 The 2017 season was a stellar one for driver Daniel Hemric.

In his first year driving for Richard Childress Racing in the XFINITY Series, the 26-year-old rookie earned 16 top-10 finishes, one pole, and advanced to the Championship 4 race at Homestead. In fact, Hemric was the only non Jr. Motorsports driver to compete for the XFINITY championship in 2017, even though he didn’t win a race.

Thanks to his strong rookie season, Hemric earned another sponsor for 2018. RCR announced in a press release that South Point Hotel & Casino will sponsor Hemric’s No. 21 Camaro in every XFINITY race in 2018.

This isn’t the first time South Point has worked with RCR. The popular casino is owned by the Gaughan family. Brendan Gaughan has driven a South Point sponsored vehicle from 2012-2017 for RCR.

?The South Point Hotel & Casino is excited to be continuing our partnership with Richard Childress Racing in the 2018 season,? said owner Michael Gaughan, according to NBC Sports. ?Watching Brendan carry our colors these past couple of years on the track and into Victory Lane has been a lot of fun. We?re looking forward to continuing the accomplishments during this coming season with Daniel Hemric. Daniel is a great driver and we know he will represent the South Point well both on and off the track.?