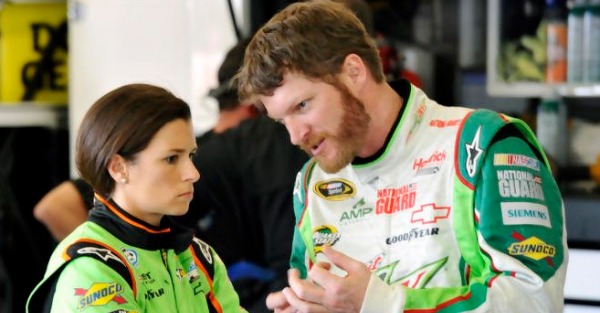 When most NASCAR drivers posts on social media, they normally post about their cars, upcoming races, or, in the case of Kyle Busch, sometimes enjoy doing battle with fans.

Increasingly, Danica Patrick’s post seem to be less about racing and more about her outside interests.

Maybe it’s always been that way, and maybe, now, people are starting to notice more because her contract with Stewart-Haas racing is in danger of not being renewed, which could spell an end to her racing career.

So while there are the occasional shots of Patrick in race gear or one of her cars, her activity has been more about building her personal brand — and that makes a ton of sense since she is, arguably, one of the the most marketable drivers in all of NASCAR (despite her lack of results).

She’s taken a spiritual bent lately, first  by posting the question, “What is your definition of God,” to this one:

She clearly enjoys her yoga …

I have been craving this playful day by the pool!!!!!!! Thank you @stenhousejr for building our dreams! 🦋☀️💚

In remarks reported by ESPN, Gene Haas, the co-owner of Stewart-Haas racing, lauded his driver of the No. 10 Ford Fusion in a clear bid to try to help her with  her sponsorship woes, but also recolonizes her marketing powerer.

“She commands an awful lot of viewers that want to know what she’s doing,” Haas said Sunday at Michigan International Speedway. “She’s like a Tiger Woods. Whether she does good or she does bad, people are always interested in what she’s doing. … I still think she has a lot of value. If a sponsor wants to sell product, she’s great at that.”

She’s not going to have any trouble outside of NASCAR is she doesn’t ride next season.