Even if he doesn’t win Homestead, Dale Jr. is already a big winner 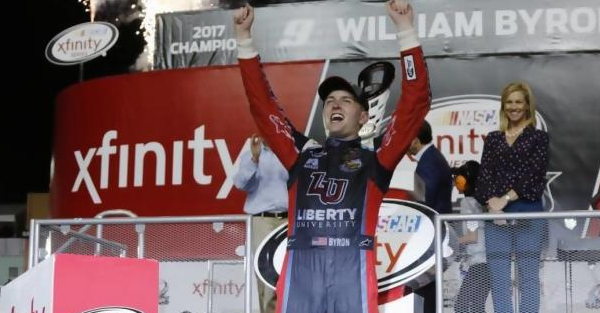 To be blunt, Dale Earnhardt Jr.’s last season racing in the Cup Series hasn’t been great.

But, as is the case normally with Dale Jr., it’s not really what he does on track that matters most, but what he does behind the scenes promoting NASCAR and giving young drivers the opportunity to drive in the XFINITY Series where he truly makes an impact.

While much of the talk surrounding last night’s race will naturally  focus on Elliott Sadler’s failed attempt at winning his first NASCAR championship. It didn’t go unnoticed that JR. Motorsports, which is the team that Dale Jr. co-owns with his sister Kelly, finished 1-2-3 in the championship standings.

William Byron, 19, led the charge by capturing his first XFINITY Series title and also won four races on the year. Sadler, who’s understandably upset at not winning the championship himself, still placed second in the standings and scored 25 top-10 finishes in 2017. Lastly, Justin Allgaier put together a solid season, picking up 2 wins and 17 top-10s, which was good enough for third place in the points.

?Man, that is tough watching those guys battle like that together,? Earnhardt said, according to SBNATION. ?William did a great job running an awesome race. … I know Elliott is probably really disappointed. It?s hard to watch any of your guys lose one, but at least we will be taking the trophy back to Mooresville (N.C.) tonight.?