Dale Earnhardt Jr. Reveals Never-Before-Seen Childhood Photo of Him and His Dad 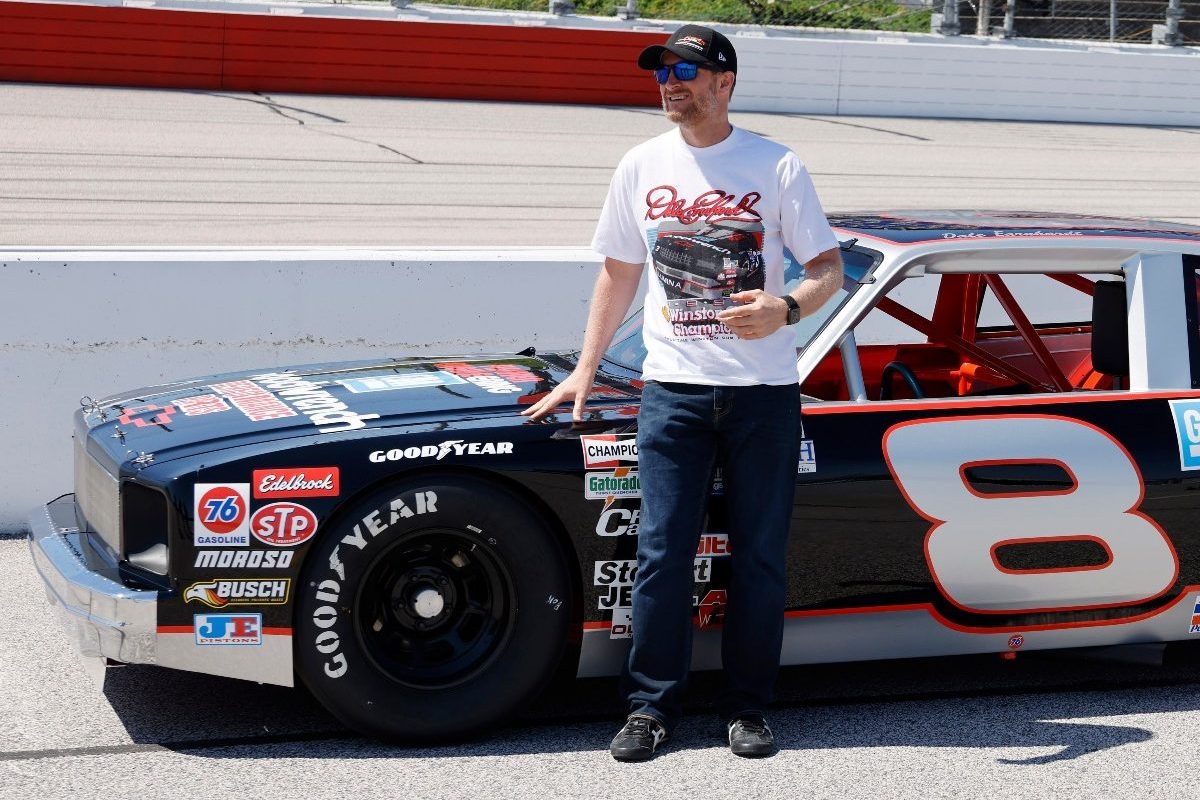 Dale Jr. has shown a number of pics of The Intimidator over the years, but one he posted to Instagram on December 3, 2019 was a never-before-seen childhood snapshot of his pops and him. Sure, it’s pretty grainy, but still a special look at a father, his son, and the family dog outside their North Carolina home.

Posted with the caption, “1982/83 with my dog Rocket. Dad washing a Ford in the yard. Lake Norman,” the grainy photo surprised several of Junior’s followers. Can you guess why?

If it seemed strange to you that Dale Sr. was pictured alongside a Ford, you’re not the only one who noticed.

“Weird to think of Earnhardt and Ford in the same picture,” one Instagram user commented, while another wrote, “Your Dad with a Ford?!. Never thought he’d have a Ford.”

A third commenter chimed in, “Saw a picture of your Dad leaning against a Ford one day in some infield. This is only the second time I saw him near a Ford.”

Since Senior drove a Chevrolet Camaro for the majority of his NASCAR career, it is a little odd to see him with a Ford. But, hey, who says you can’t like both? When you’re a auto racing legend the likes of Dale Earnhardt, you make your own rules.

The NASCAR Careers of Senior and Junior

Kicking off his full-time NASCAR Winston Cup Series (now the Monster Energy NASCAR Cup Series) career off in 1979, Dale Earnhardt Sr. started with his foot on the gas and never let up. That year, he was named Rookie of the Year. The following year, with wins at Atlanta, Bristol, Nashville, Martinsville, and Charlotte Motor Speedway, Earnhardt won his first Cup Series championship. This made him the third driver, along with Richard Petty and David Pearson, to win Rookie of the Year and Cup Series championships.

Dale Sr. would go on to win six more championships behind the wheel of his Chevy (1986, 1987, 1990, 1991, 1993, 1994), tying him with Petty and Jimmie Johnson for the most championship wins of all time. Sadly, the racing world lost Dale too soon, following a fatal crash at the 2001 Daytona 500. His legacy not only lives on through “Earnhardt Tower” at Daytona International Speedway, but also through his son, Dale Earnhardt Jr.

While Dale Jr. didn’t have quite the career his dad did, he was no slouch on the track. A two-time Daytona 500 winner, Junior won the Busch Series (now the Xfinity Series) championship in 1998 and 1999. Along with his 24 wins, 93 top-10 finishes, and 10 poles in the Xfinity Series, Earnhardt also has 26 wins, 260 top-10 finishes, and 15 poles in the Cup Series. His 15-year reign as the Cup Series Most Popular Driver is nothing to sneeze at either.

These days, Dale Jr. has found a career that goes beyond simply racing cars (though he still races in the Xfinity Series part-time), as the co-owner of JR Motorsports, the host of his own podcast, an NBC Sports commentator, and the owner of several other business. And, so, the Earnhardt name lives on. We have a strong feeling that Dad would definitely be proud.