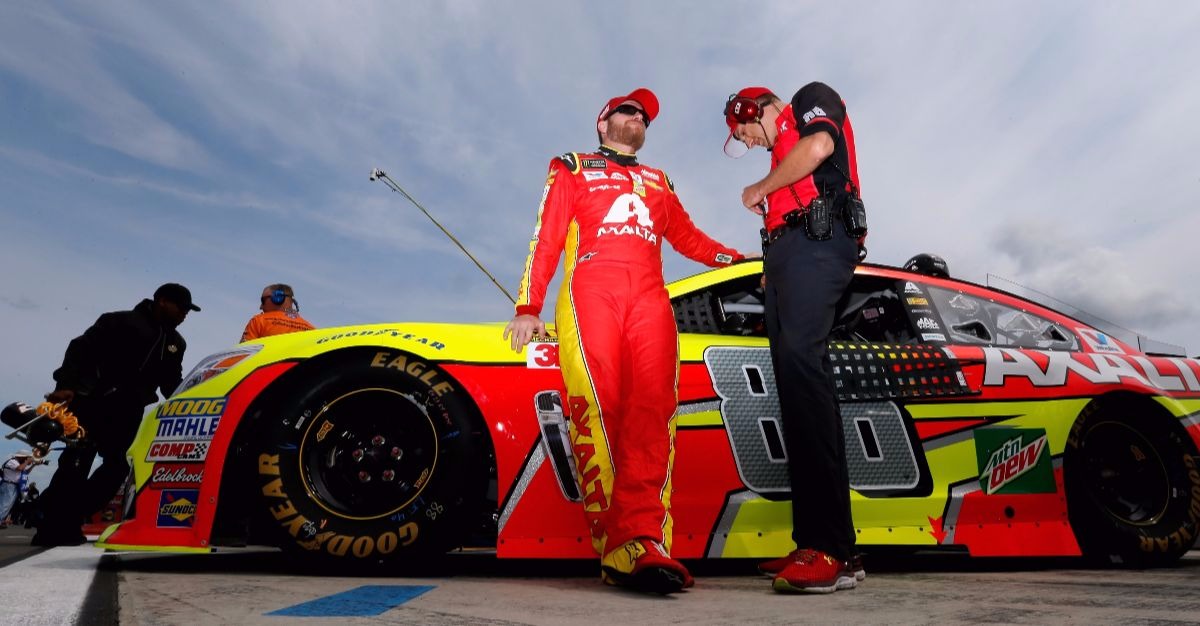 ESPN has a piece profiling the job of Dale Earnhardt Jr.’s crew chief. It does not sound fun. Junior has had nine crew chiefs throughout his career. From his first to his current crew chief, they all have stories that prove the job is like no other in NASCAR.

Even going back to the beginning, Dale Jr’s first crew chief, Tony Eury Jr was getting so much heat from Junior nation, that the man himself felt like he had to defend him after a rough start to the 2009 season.

“I’ve said it 100 times, I don’t know, it just doesn’t seem to make a dent, but the guy I feel bad for is Tony Junior,” Earnhardt Jr said. “He gets criticized so badly. Everybody in this room, and some of you have criticized him yourselves, know how smart a guy he is, truly knows he’s a good mechanic and a solid crew chief and he wanted to do this for a living just like I do. I’ll take the fall. I’d rather be crucified than him … I feel like I’m sending my brother to jail for a crime I committed.”

Getting blamed for the team’s struggles is nothing new for crew chiefs, as Steve Letarte, another one of Junior’s nine crew chiefs knows.

“It’s never the driver’s fault, it’s the crew chief’s fault, that’s just how it is, but it can get tiresome hearing how stupid you are day-in and day-out, so you lash back, and that’s a mistake,” Letarte said about fans on social media especially. “One time in particular, a guy really went after me and I went back at him and then I just forgot about it. The next day I hear from him and he’s begging, ‘Please, man, get them off of me!’ When I’d turned on him, so did Junior Nation. They just killed this poor guy until I told them to back off. I realized, ‘Hey, I signed on for this.’ Other people didn’t.”

That is a common theme. On top of the normal struggles a crew chief faces, like managing the pit crew, building a relationship with the driver and being the primary target for NASCAR penalties, Dale’s crew chiefs have the added pressure of having some of the most intense fans in NASCAR watching their every move. Junior Nation makes the typical day-to day that much more complicated.

A story that illustrates this point well is former crew chief Lance McGrew just trying to get lunch.

“I looked up and there was some stranger suddenly sitting across from me in the booth,” McGrew said. “I was like, ‘Can I help you?’ Of course, he said he was a big Dale Earnhardt Jr. fan and he wanted to know what I was doing to make the cars better because it had been too long since Dale had won a race.” Being a veteran of being questioned by a driver’s fans, Mcgrew responded in the best way: “I just politely smiled at him and said, ‘Well, clearly I need help. So, you got any good ideas?’ ”

Greg Ives, the current holder of the job, thought he knew what he was getting into when he took the job, but learned, like each one before him, that it just isn’t the same.

“Man, I was Jeff Gordon’s crew chief,” Ives said. “So when I moved over the 88 car in 2011 I thought, no big deal, it’ll be the same, right? Wrong. Being the crew chief for Dale Earnhardt Jr. is a true privilege. But I don’t care how long you’ve been in the sport of auto racing, there’s no way you can really understand the difference of being in this particular job unless you’ve actually been in these shoes.”

We may not totally understand what it’s like, but thanks to ESPN’s interviews, we know we couldn’t have handled it.