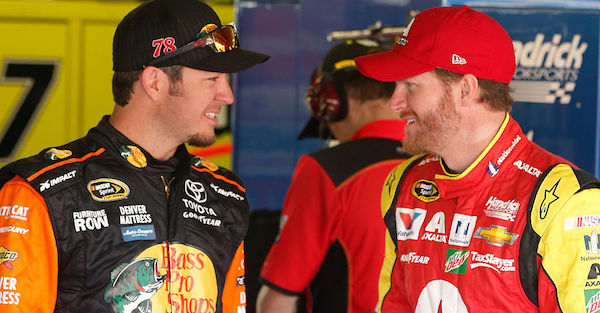 Dale Earnhardt Jr.?s farewell season has not exactly gone the way he would have liked.

In 32 starts, Dale Jr. has only managed one top-5 finish and is currently 22nd in the NASCAR Monster Energy Cup Series point standings. However, none of those stats has effected Dale Jr.?s popularity, as he is still one of the most followed drivers on Twitter.

In fact, now that he?s no longer part of the championship picture, it seems like Dale Jr. might be getting an early start on a career in broadcasting because he recently tweeted out his picks to make it to the Champion 4 race in Homestead, according to NBC Sports.

As you can see, if Dale Jr. had to put money on it, then he would take Martin Truex Jr., Kyle Busch, fellow Chevy driver Kevin Harvick, and his teammate Jimmie Johnson as the drivers fighting it out for the Cup Series title on Nov. 19th.

However, there are a couple of drivers that Earnhardt hopes advances to the next round instead of Busch and Harvick. Those two drivers are Ryan Blaney, who drives the No. 21 Ford Fusion for the Wood Brothers, and his teammate Chase Elliott, who took over the No. 24 Chevrolet SS after Jeff Gordon retired a few years back.

Perhaps upset by the snub, Keselowski joking replied to Dale Jr.?s Tweet by saying Earnhardt was ?salty,? before announcing a few days later that he would be donating proceeds from t-shirt sales–which commemorate his recent win at Talladega–to the Dale Jr. Foundation.

Out of respect to @JRMotorsports and @DaleJr
I’m donating my proceeds from this to Dale Jr foundation https://t.co/zQCeXYZAVf

Related: Dale Earnhardt Jr. said he expects his fans to gravitate to these young drivers