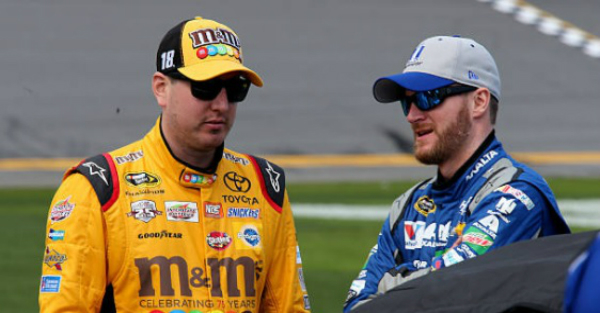 Last month Kyle Busch let it be known that he’s not too keen on the way NASCAR is promoting and marketing its young drivers.

Busch’s gripe is that when he was younger and storming his way onto the scene, he wasn’t treated the way a lot of the young drivers are today. Dale Earnhardt Jr. recently shared his take on the situation on an episode of his Dale Jr. Download podcast, according to NBC Sports.

“The first thing I thought of was glad I’m not at media day because I know Kyle is pissed off,” Earnhardt said. “It’s early in the morning, he just got to media day, it was one of the first five questions he got that day.

“If he’d have been given that question at four o’clock in the afternoon on his way out he’d have given a totally different answer,” Earnhardt added. “Because he would’ve been in a better mood.”

While Earnhardt thinks Busch’s response was based more on timing than how he actually feels about the way things are with NASCAR and the young drivers, he also knows there is some truth to Busch’s response

“He’d just gotten there, he’s pissy, everybody is sorta that way, except for the young guys,” Earnhardt said. “They’re thrilled, media day, it’s my first media day! I’m so happy!

Many drivers have chimed in with their two cents, including Ryan Blaney. Earnhardt said NASCAR is most likely going to call a youngster like Blaney, who will say yes as opposed to Busch, who has more hurdles to go through and will probably say no.

“Blaney comes in and I think a couple of other guys and said “We’re the ones getting marketed because we’re the ones that are saying yes,'” Earnhardt said. “If NASCAR says I need a guy that will go to New York tomorrow and do eight hours of media, who are they going to call?

“Are they gonna text Kyle Busch first? No, because they probably know he’s gonna say no,” Earnhardt added. “They got a direct line to Ryan and he’s gonna probably say yes unless there is something in his way.”

While some of the youngsters are eager to say no because they’re excited and willing to help, Dale Jr. thinks some of them might not know they can say no.

“The young guys are always open to it, they know they need the traction,” Earnhardt said. “Now a lot of them don’t know too that they can say no, not can’t say no, but feel like they can’t say no.

“William Byron doesn’t feel like he can say no, William Byron’s gonna say ‘I gotta do this,'” Earnhardt added. “Kyle Busch or myself we feel like we could probably do without it and get by.”