Dale Earnhardt Jr., Kyle Busch and Danica Patrick all crash out at Bristol 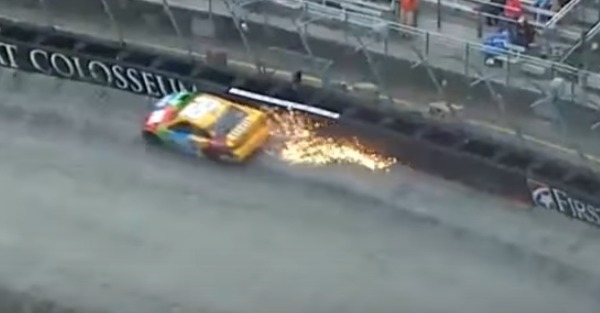 The Food City 500, originally scheduled to be held Sunday at Bristol Motor Speedway, had been postponed due to heavy rain. It’s the first Monster Energy NASCAR series race impacted by weather this season and was rescheduled for Monday.

While everyone scrambled to schedule a late, long lunch to catch the action, NASCAR spent the extra day of preparation adding an alcohol/glue mixture to the bottom of the track to create a grip strip down low.

Only 20 laps in, the typical traffic of short track racing began to liven things up.

See it courtesy of @Mobil1. pic.twitter.com/MkXpbeI9tf

With the close quarters racing, there were plenty of close calls, saves and, of course, crashes.

Dale Earnhardt Jr. retired from the race after an oil leak sent him into the wall.

David Regan and Danica Patrick got together and Patrick wouldn’t return.

Kyle Busch also had his day shortened after a meeting with the barrier.

Kyle Larson won stage one after starting from the pole and Martin Truex Jr. took stage two. After speeding penalties took out both of the two stage winners, Jimmie Johnson was able to come away with his second win in a row. Clint Boyer (Who had a speeding penalty himself) and Kevin Harvick rounded out the top three.