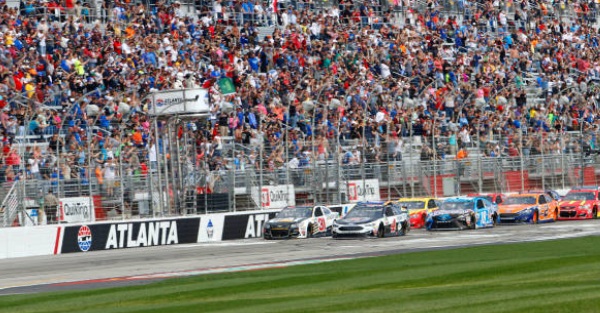 NASCAR announced its Grand Marshall for the Folds of Honor Quiktrip 500 at Atlanta Motor Speedway and it’s sent Twitter into frenzy.

RELATED: A championship winner will say the most famous words in racing at Daytona

Atlanta native Kenan Thompson, the comedian and actor who stars on Saturday Night Live, will be the Grand Marshall for the second NASCAR race of the season.  Twitter exploded, and even Dale Earnhardt Jr., the Grand Marshall at the Daytona 500, weighed in.

Love this: @officialkenan is going to be the Grand Marshal at the @amsupdates NASCAR race later this month. pic.twitter.com/SyeXhGuuiE

This made my day. Huge fan of Kenan. https://t.co/6EsuwXajnb

Fans shared a plethora of GIF’s shgowcasing Thompson and some of the various characters he’s played on Saturday Night Live during his 15-year tenure on the show.

Welcome to the good burger 😂😂😂 pic.twitter.com/FQeMQnKvIb

Thompson got his start in television in 1994 on Nickelodeon’s All That, then starred in Kenan and Kel alongside Kel Mitchell from 1996-99. He also starred in several films before landing at SNL, where he has been since 2003. Thompson has been with SNL a record 15 seasons, beating a record that was previously held by Darrell Hammond, who was with the show for 14 seasons. He’s best known for his impressions of Charles Barkley, Reverend Al Sharpton, and Steve Harvey, just to name a few.