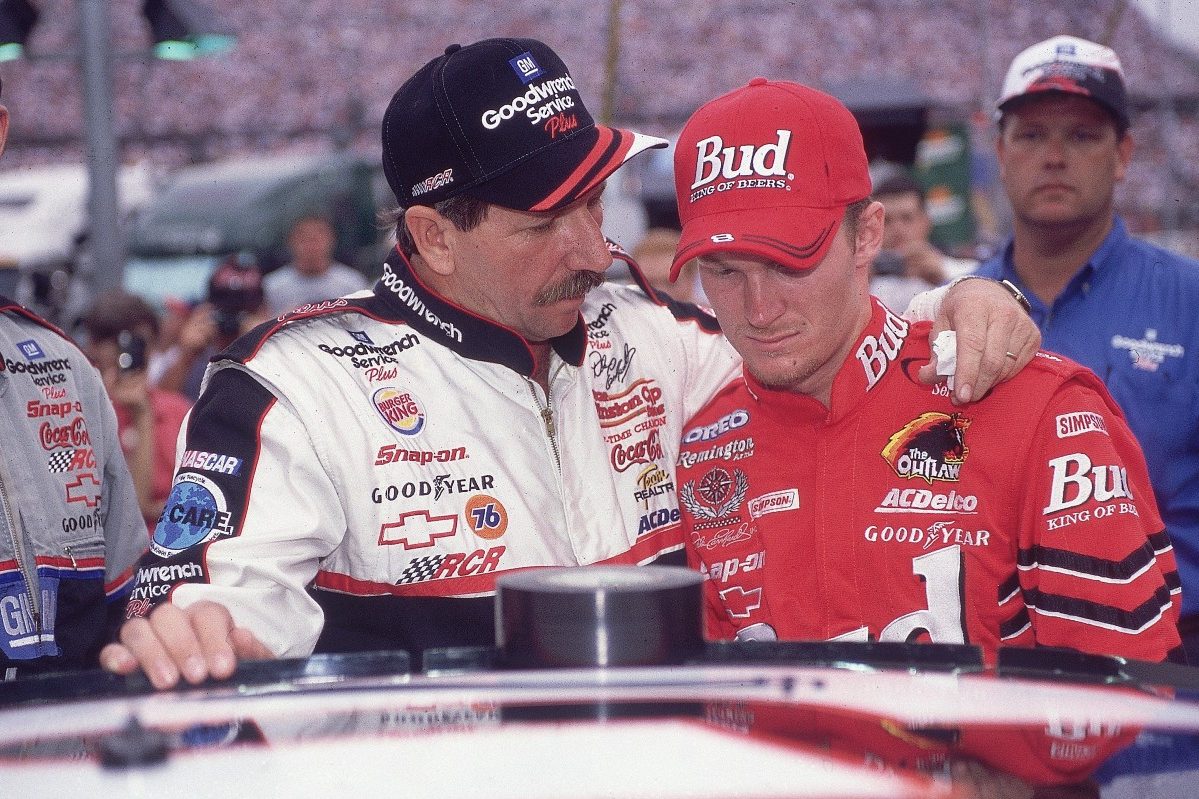 Dale Earnhardt Sr. and Dale Earnhardt Jr. were one of the most iconic father-son duos in NASCAR history. If not for The Intimidator’s untimely death at Daytona in 2001, who knows how much they could have accomplished together on the track?

Of course, nobody misses Dale Sr. more than Junior, and with each year that passes, he seems to open up more and more about his relationship with his dad, offering insight into both the good times and the bad times.

During a lengthy interview on The Joe Rogan Experience back in November 2018, Junior recalled that times were bad before they got good, and it took some time before he went from seeing himself as a disappointment in his dad’s eyes to being his best friend.

“I always felt like when I was younger I kind of let my father down, because…There was this one time, I was probably 12 years old,” Junior said. “Me and my buddy [were playing outside]. My dad’s standing over there and there was a bucket, full of s***. And he’s like ‘hey, come here Junior, pick that bucket up and move it over here.’ And I went over there and tried to pick it up, and I was like ‘I can’t lift it’ And he got so pissed off at me because he knew I didn’t try. And he says to my buddy, Ryan, ‘Ryan come over here, pick the bucket up and take it over there.'”

Things may have started out rocky, but it was when Junior starting coming into his own as a professional race car driver that the dynamic shifted and everything, as Dale Jr. puts it, “completely changed.”

“They made the decision to put me in this car in the Xfinity Series,” Dale Jr. continued. “You’d think that dad would come tell me, or we would have a press conference — might be a press release, at least. This is a month before the race season starts. I think I’m out of racing, right? I ain’t even talked to anybody about what I’m racing or if I’m racing in a couple months. I think that it’s dried up, opportunities are gone.”

“I walk into the shop to get something, where [Tony Eury Sr.’s] race car was, and my name was on the roof. And I was like…I thought it was a joke, like a mean joke. A prank. And they were laughing, and I’m like ‘man, that’s messed up. Man, y’all are [expletive] for putting that name on there.’ And they were like ‘it’s true, man.’

“So I started racing that car, and I had great success. We won six or seven races the first year, we won another six or seven races the second year, championships in both seasons. So, I mean, the choice to put me in that car worked out better than he probably ever imagined. Ever. In 159 late model races that I ran from ’94 to ’97, I won four. So he put me in this car on a whim and a prayer, and we ended up winning a championship. Two in a row.”

“So he is thinking ‘Damn! This little s*** can drive a car!’ And that’s when our relationship completely changed. That’s when [he] had his arm around me, we were doing s*** together, we had sponsor deals and promotions together. We were doing photo shoots together. I saw him all the time, and we talked about all kinds of [things]. We talked about life, girls, everything but racing. We didn’t talk about racing much, which is fine. And it was awesome. So ’98, ’99, and then 2000 I went to Cup. He built a Cup team around me…And then he got killed in 2001 at the start of the season in the Daytona 500. So those three years — ’98, ’99, ’00 — were as good as it could get.”

While Dale Jr., who was voted NASCAR’s most popular driver 15 times during his career, has been completely candid about the physical and mental toll that racing eventually took on him as his career progressed, you can tell he really looks back on those early days fondly. Though it was only for a short time, the fact that his dad got to see him blossom as a NASCAR driver is something that transcends the sport itself.