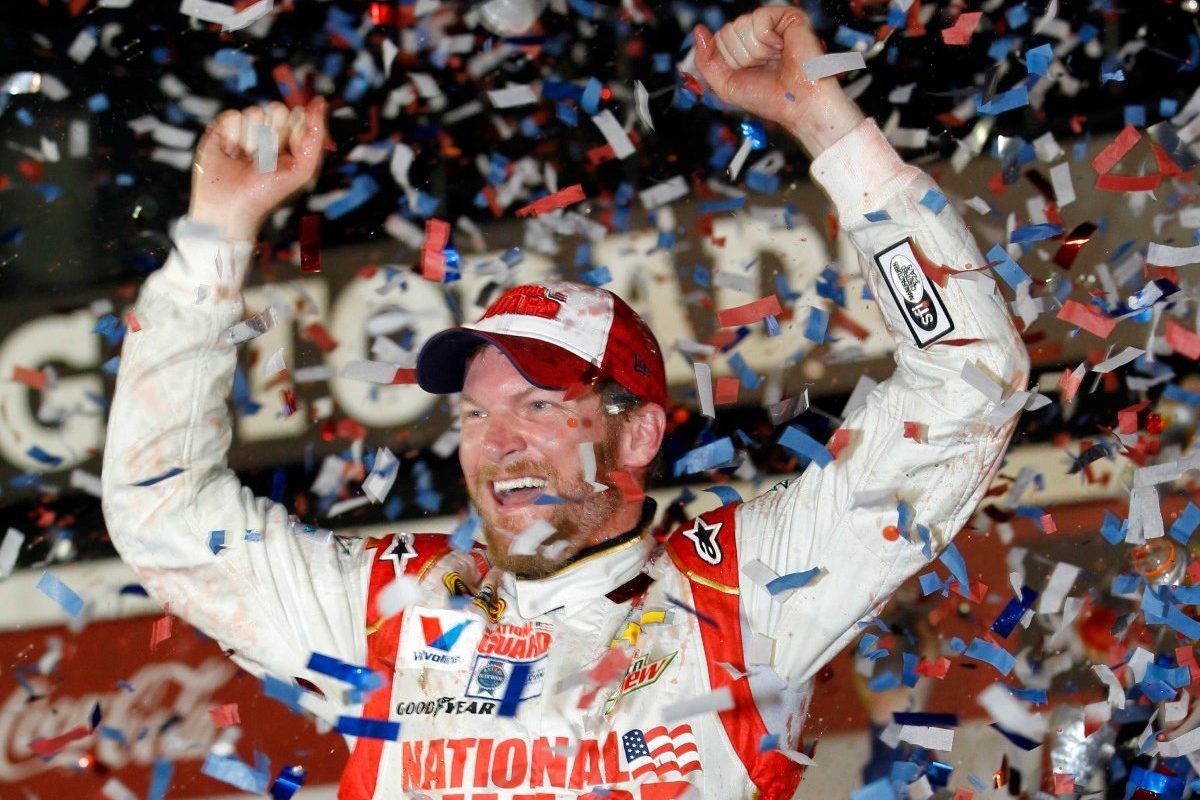 Although many NASCAR drivers strive for it, only a small percentage will ever achieve the bragging rights of winning of the Daytona 500 at Daytona International Speedway. To win “The Great American Race,” the driver needs proven skill behind the wheel and an experienced racing team and crew chief in the pits. Pulling off a win here puts the victor in a recognizable category of talented racers, including Jimmie Johnson and Jeff Gordon.

The NASCAR Cup Series race is one of the most intense and awaited motorsports events out there, and 15-time Most Popular Driver Dale Earnhardt Jr. is among those drivers to see victory lane at Daytona not once, but on two separate occasions. Each win showcased the North Carolina native’s driving skill, and was also a tribute to his iconic father, Dale Earnhardt Sr., who won himself in 1998 and tragically died after a final lap incident at the 2001 Daytona 500.

In recognition of this NASCAR history, let’s take a look at how Dale Jr. twice saw the checkered flag in his Chevrolet race car at the Super Bowl of Stock Car Racing.

Ahead of his first Daytona 500 victory, Dale Jr. had a great qualifying time, which put him in a starting position of third place. Even though he was in a good spot, moving his way up into first position certainly didn’t come easy. He had to compete directly against all-star race car driver and runner-up Tony Stewart, who had led 98 laps out of the race. With only 20 laps left in the event, Junior made his move to the inside and finally passed Stewart, where Dale impressively maintained the pole position until the Chevy crossed the finish line. This chalked up yet another memorable victory for his team, Dale Earnhardt, Inc.

During this time, Earnhardt was on a roll, nearly sweeping Speedweeks. On top of his Daytona 500 win, he also got the victory during the Gatorade Duel NASCAR race and just barely missed another win in the Budweiser Shootout — now called the Busch Clash — where he came in second to Dale Jarrett.

At this point, Earnhardt had truly proven to the world what he was capable of as a full-time driver. In case people still weren’t convinced, the JR Motorsports co-owner won the Daytona 500 for the second time in 2014, while driving for Hendrick Motorsports with team owner Rick Hendrick. This 2014 race was certainly a little more interesting than his first win in 2004.

For this race, Earnhardt Jr. started out in ninth. During the first quarter of the race, he mainly stayed in the middle of the pack and didn’t appear to be pushing extremely hard. Only 45 minutes into the race, the red flags came out for a rain delay, which lasted over six hours. When it came time for the restart, Junior appeared to be a whole different animal. He led a total of 54 laps during the race, with the final 18 being the most crucial. Not only did he maintain the lead, but he defended against Denny Hamlin and Brad Keselowski by breaking the draft in both the high and low lanes.

A last-lap crash between Kevin Harvick and Jamie McMurray brought out the caution, and officially allowed Dale to cross the finish line in first place just before midnight. It was this kind of driving that makes you really understand why Dale Jr. is going to be included in the NASCAR Hall of Fame. One thing is for sure: Dale Sr. would be extremely proud of his son’s racing accomplishments.