Dale Jr. talks about the moment he knew he wanted to be a broadcaster 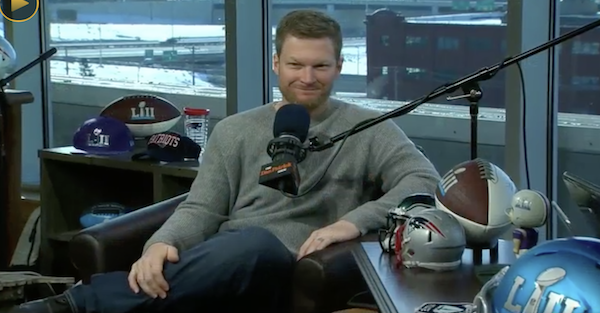 Broadcasting isn’t something that was at the top of Dale Earnhardt Jr’s post-retirement list.

In an appearance on the Dan Patrick Show, Earnhardt talked about how he caught the broadcasting bug.

I had no idea when I got out of the car what life was going to be like, what I was going to do. I really enjoyed being part of something in motor sports and in racing, and I needed to feel that feeling as I go into the next chapter — being a part of a team,  being an asset to something,  being valuable to something. So I went into the booth a couple times in 2016 and I went in there just to check this box. Is this something I want to do, something that would excite me, something that I may be able to do after driving, because I knew my racing career was coming to an end. And i had so much fun. I was only in this booth … for a couple of hours and then I did the entire Clash at the start of the season last year, but I had come out of there on cloud nine. It was so much fun,  and they’re talking racing and just telling people what you’re seeing. It was so fun. So I’m thinking that’s it, this checks all the boxes this is going to be something that keeps me in the sport and a way for me to help the sport.

Not only is broadcasting going to keep Dale Jr. in the sport he loves, NBC appears to think of him as a future broadcasting superstar.

Earnhardt will be featured on the Super Bowl pre-game show, as well as select Winter Olympic broadcasts.

His Olympic duties will at least include speed skating and bobsleds, two sports based on something Junior knows plenty about: speed.

“We can’t wait to get Dale’s take on what is one of the most compelling aspects of the Winter Games ? sports that offer a mix of speed with the prospect of danger, an equation that he knows very well,” said the president of NBC Olympics Production and Programming, Jim Bell. “Instead of the turns at Daytona, it’s the downhill, the luge, and the short track oval. And I think he will have something unique to offer about the need for speed on snow and ice.”