Dale Jr’s goodbye — and one, big embrace — are among the most touching moments of 2017 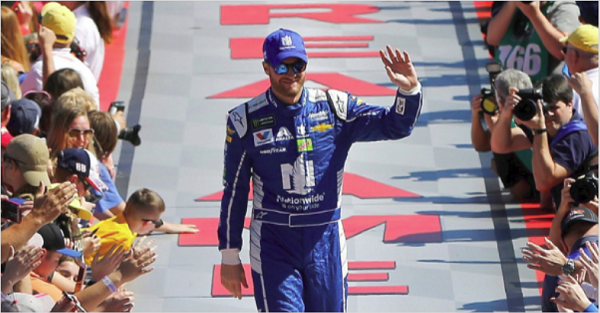 On April 25, 2017, Dale Earnhardt Jr. stunned the racing world when he announced plans to retire following the 2017 season.

The announcement came one day after crashing at Bristol Motor Speedway and finishing 38th. This shocking news followed a disastrous 2016 season where Junior didn’t compete in the second half while recovering from concussion symptoms.

After winning a combined seven races from 2014-15, Dale Jr. looked to have a lost a step upon his return and wasn’t a threat to win races each week like he’d been previously.

After making the announcement, it appeared like an enormous weight had been lifted off his shoulders. The remainder of the 2017 season became his farewell tour, where NASCAR’s biggest superstar could say goodbye to his adoring fans.

If you follow NASCAR on NBC’s Twitter account, then you should know they counted down NASCAR’s best moments of 2017 leading up to the New Year. Some of their top moments were nostalgic, like when retired drivers Mark Martin and Dale Jarrett drove old-school cars around Darlington, while the top moment went to Martin’s Truex Jr.’s championship-winning performance at Homestead.

However, the most emotional part of the year came at Dale Jr.’s final race. Upon his introduction to the crowd, he received a thunderous ovation from Junior Nation. After the race, he broke down in tears while hugging team owner Rick Hendrick after parking his car for the final time.

For 17 years, Dale Jr. was the heart and soul of NASCAR. The video below offers a quick glimpse at what his retirement meant to the sport.