Switching to Ford was a struggle for a NASCAR veteran 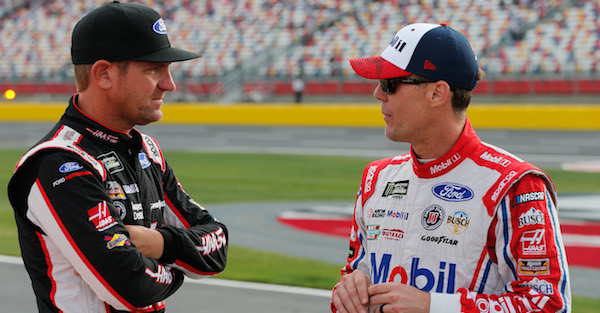 Brian Lawdermilk/Getty Images
CHARLOTTE, NC - MAY 25: Clint Bowyer, driver of the #14 Haas Automation Ford, talks with Kevin Harvick, driver of the #4 Mobil 1 Ford, prior to qualifying for the Monster Energy NASCAR Cup Series Coca-Cola 600 at Charlotte Motor Speedway on May 25, 2017 in Charlotte, North Carolina. (Photo by Brian Lawdermilk/Getty Images)

For the first time in his Cup Series career, Clint Bowyer drove a Ford in 2017.

Bowyer was Tony Stewart’s replacement at Stewart-Haas Racing, and he made the transition from Chevy to Ford, and he admitted via Motorsport that the change was difficult for him last season.

“It was very taxing on everybody at that shop,” Bowyer said. “You saw it from the management to the army down on the floor. It was all hands on deck constantly.

“I am not saying it won?t be there this year but you would learn something and then it would be like, ‘Now we have to hurry up and get it to the track and how soon can that happen?’ Then by that time something else had come along.”

Related: NASCAR analyst has a wild proposition for Ford?s next stock car

Bowyer missed out on the playoffs as he finished 18th, though it was a much better season for him than the 2016 season with HScott Motorsports.

Still, it’s been nearly six years since Bowyer has won a race, and he’s hoping he’ll break through this season.

“We are competitors. I have raced since I was five years old. I have always wanted to win. Once you get a taste of that, there is no going back from that.”

Bowyer had six top-5s and 13 top-10s last season, and he came close to winning races on multiple occasions. He just narrowly missed the playoffs, and he’s hoping his second year with SHR will produce better results and a spot in the playoffs.