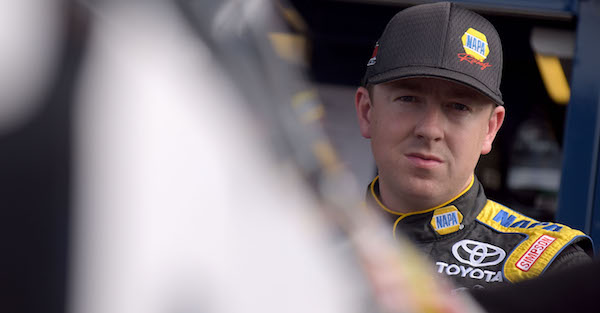 David Gilliland Racing and Crosley Sports Group officially announced their merger earlier in January, and the new team now has its first driver.

DGR-Crosley announced, via Facebook, that Chris Eggleston will drive the No. 17 Toyota truck in the NASCAR Camping World Truck Series in 2018.

DGR-Crosley will be new to the truck side of things from an ownership perspective,,” Eggleston said in a press release. “I feel very confident that we will be running up front, especially with the new trucks from Red Horse (previously known as Red Horse Racing) and support from TRD. It proves David (Gilliland) and his team are committed to their truck program and I’m really looking forward to be a part of it and help make it grow.”

And he noted how excited he is about joining the team.

Very excited to go truck racing with a great group of guys like @DGR_Racing. However I am beyond excited for the little one to come in August. 😬 https://t.co/wsVh2werg2

Eggleston won the 2015 NASCAR K&N Pro Series West championship, and he finished second in 2017. He’s made six Truck Series starts during his career.

“We are excited to have Chris join our DGR-CROSLEY team and drive our truck for a few races,” Gilliland said. “We’ve watched him race on the west coast, he is a West Series Champion after all and brings some experience to the table. As we navigate the first few races with a newly formed team, we are confident he will work hard and give us great feedback to learn and grow together.”

DGR-Crosley is still in the process of getting its team together, and they will announce crew chiefs and exact races dates in the near future.

The team will compete in the Truck Series, ARCA, Late Model and K&N Series.