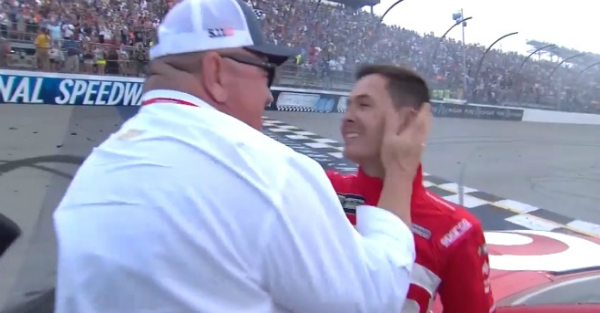 In another edition of Landon and Matt’s NASCAR Christmas Presents, the two relive a moment that saw one team owner celebrate a little too hard after one of his drivers won a race.

Landon Cassill and Matt Dibenedetto took a stroll back to June, when Kyle Larson won the Cup series race at Michigan International Speedway. Not only did Larson win, but team owner Chip Ganassi wouldn’t let him forget it with a rather stern atta-boy to the neck and face area.

RELATED: Chip Ganassi Racing is one win away from a huge milestone

Cassill and Dibenedetto joked that Larson probably suffered a concussion and would have to go through protocol for the injury.

“Does he not understand how strict NASCAR is on the concussion protocol,” Dibenedetto said. “Like — boom — Kyle Larson out for two weeks.”

“I want to win a race really bad, but I’d be scared if I was driving for Chip Ganassi,” Benedetto added. “I see Chip coming and I’m like ‘whoa hang on Chip.'”

“I’d let him hit me with a baseball bat if it meant winning a race,” Cassill said.

The two also noted Ganassi giving his crew chief quite the shaking after Larson took the checkered flag.

“It’s like the most violent win I’ve ever seen in my life,” Benedetto said. “I’m going to give my crew chief whiplash.”

With the energy for the team that high at the top, it’s no surprise that Larson was as charged up as he is. With a successful 2017 campaign under his belt, it’ll be exciting to see what’s in store for 2018.