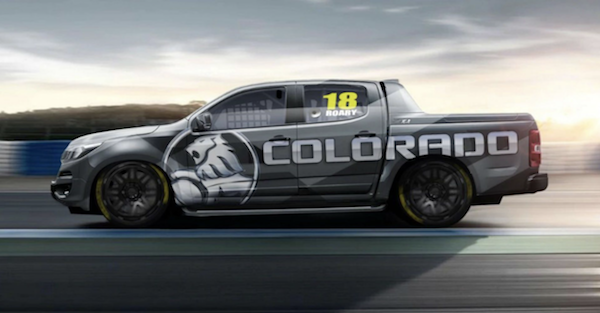 Our friends from the land down under are at it again, this time it’s with a diesel Colorado. Holden is getting ready to compete big time, in the up coming Australian SuperUte series. Their weapon of choice is a diesel powered Holden Colorado that will put out 340 horsepower and 500 lb-ft of torque.

The Colorado is modified with an upgraded suspension and tires, full roll cage and plenty of stickers for good measure. Other trucks competing are the Mazda BT-50, Toyota Hilux, Isuzu D-Max, Mitsubishi Triton, and the Ford Ranger. If you haven’t heard of most of those trucks it’s ok, the Colorado is the only one that’s currently sold in the states.

HorsePower is limited by class rules but, there is no doubt the stout ZR2 turbo diesel could make loads more. I’ts safe to say with 500 lb-ft this truck will be able to hold its own.

Tracking testing is under way right now and the race will take place in 2018.

Related: Chevy’s Colorado ZH2 Concept Is Only For The Military And Runs On Fuel Cells