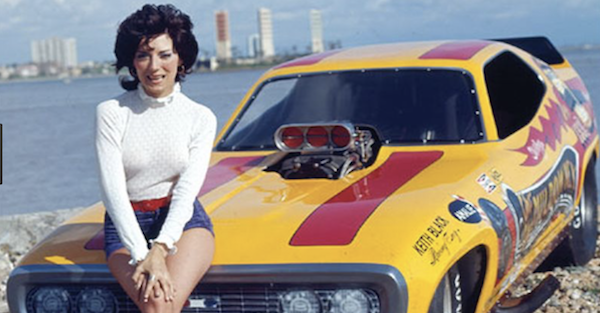 The sport of automobile racing has always been about one thing and one thing only, crossing the finish line first. The great thing about the finish line is it doesn’t care how you get there or who you are. Women have been tearing up tracks all over the world since the beginning of professional racing, and here is a short list in no particular order of just a few out of hundreds of successful women race car drivers.

Sara Christian was not only the first woman to compete in NASCAR, but she raced in the very first race NASCAR held in 1949. She qualified 13th at Charlotte Motor speedway and later that year, competed against her own sister Ethel and a third female driver by the name of Louise Smith. This was the first time we had seen at least three female drivers in the same race. Sara’s husband Frank also competed against her in NASCAR making them the first married couple in the same race. One of her top career accomplishments was a sixth place finish at Langhorne speedway where she was the first woman to finish top ten and was invited by the race winner, Curtis Turner, to join him on victory lane. Sara retired from racing early but was awarded with the United States Drivers Association Woman Driver of the Year award and inducted in the Georgia Automobile racing hall of Fame in 2004.

More recently, there is the racing icon: Danica Patrick. Inspiring women everywhere, Danica has raced in the Indycar series and in NASCAR, making her one of the most successful female racers in history. In 2005, Danica became the 4th woman to make it to the Indianapolis 500. She lead that race multiple times and ended with a historic 4th place finish while enduring issues with her car during the 500 miles race. In 2007, Danica signed on with the famous Andretti Green racing team. That year, she reached the podium for the first time with a 3rd place finish that was less than one second from a win. She left Indy in 2011 to compete full time in the Nationwide NASCAR series along side teammate Dale Earnhardt Jr. Danica’s goal was to finish in the top ten at the Sam’s town 300 in Las Vegas. She not only accomplished that goal, but finished 4th, making her the highest placing woman in NASCAR history. Danica’s place in racing history is already solidified along with her role in promoting the sport to young girls everywhere. She was awarded the 2008 and 2012 kids choice award for favorite female athlete.
Moving to drag racing, we have to start off with Shirley Muldowney. She has been competing in the the hardest form of drag racing there is, Top Fuel. Shirley is the most successful female in drag racing as she is the Winner of three NHRA Winston Top Fuel championships and 18 NHRA national events. Shirley is also one of the most durable people in modern sports having competed for more than forty years. Muldowney suffered horrible injuries from a high-speed crash back in the mid 1980s, but she was back one year later and in 1987 won her 18th NHRA national even. Shirley has won many awards in her career, most impressive being the the honor she received from the New York State Senate. She was named one of thirty “Woman of Distinction” alongside the likes of Susan B. Anthony and Eleanor Roosevelt. She was also named in the top 100 woman athletes by Sports Illustrated.
Leah Pritchett is one amazing 28 year old drag racer. She too competes in Top Fuel, and just this year recorded the fastest pass in NHRA history at 3.658 seconds. Pritchett races for Don Schumacher Racing and is sponsored by Papa John’s and FireAide 2000. Leah is not only a very successful racer, but she has also built cars with her father Ron. At 18, their daddy/daughter project was building a Nostalgia Nitro Funny car. She used that car to become the first woman to make a 5 second pass in that class and the first person to reach 250mph. Leah has a long career ahead of her and with the support of her father and pit crew member husband the skies the limit for this family.
Women being into racing is a win on so many levels. Sharing a hobby with the women in your life suddenly makes ordering all those parts totally okay. Want to go out racing all night?  No problem, she does, too. Really want to buy that old Chevelle that needs a complete restoration? She will help you get it back on the road.
In the end, women have been gravitating towards racing more and more in recent years. Maybe it’s because of young stars like Danica, Leah and the Force daughters. Maybe it’s just because racing is a sport anyone can succeed in. Either way, see you at the starting line ladies, go easy on us.
Related: The Speed Sisters are the first all woman race team in the Middle East