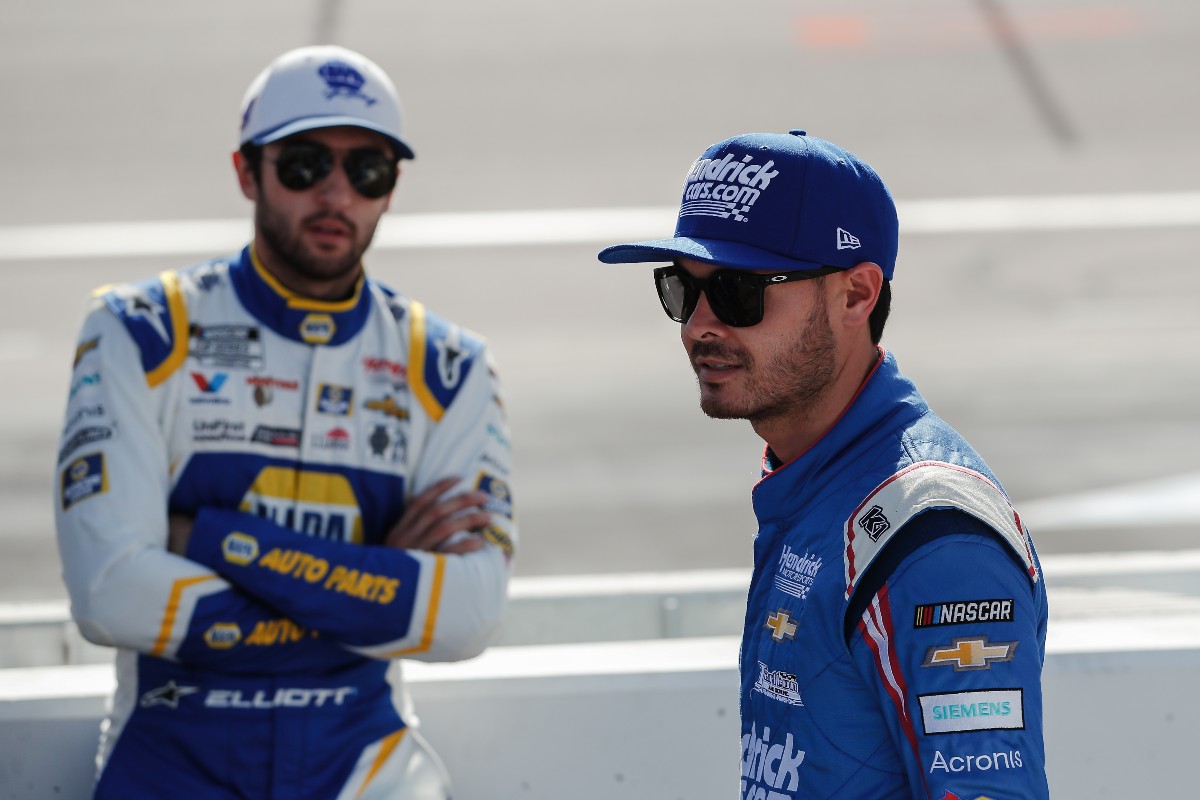 In some ways, last Sunday’s race at Auto Club Speedway was a great day for Hendrick Motorsports.

Kyle Larson, coming off a frustrating Daytona 500, was able to dust off the cobwebs and secure the win at the Wise Power 400. However, that big victory didn’t come without a cost, as the driver of the No. 5 car sent his teammate Chase Elliott into the wall with 20 laps remaining.

To say that Elliott was none too please with Larson’s move would be an understatement.

“What the f*** is he doing, man? It wasn’t even close,” Elliott said over his in-car radio following the incident. “It’s probably going to break again before the end of the race. But I don’t really give a f*** who is leading the race.”

While Elliott didn’t make any public comments immediately after the race, Larson appeared at a post-race press conference to give his side of the story, which you can see in the below clip.

“So, I didn?t get through (Turns) 3 and 4 very well,” Larson said. “Joey (Logano) did a good job on the bottom, and then we were side drafting each other, and I?m not even looking in my mirror at that point because all I’m worried about is Joey and I’m looking out of my A-post window. I had a run, so I went to peel off, and as soon as I peeled off, my spotter is yelling, ‘Outside! Outside! Outside!’ And I had no clue he was even coming.”

Larson continued, “I hate that I ended his day after they worked so hard to get back to the lead lap and back in contention to win, but it was just an honest mistake on probably both of our faults. I should have had more awareness in my mirror. My spotter could have told me he was coming with a big run, and we would have avoided that mess. I would have probably not been side drafting on Joey as hard as I was. I would have been more so protecting on Chase than worrying about Joey.”

“It happened, and I hate that it did. I know they?re upset. But we’ll talk, and hopefully we’ll get on the same page. I would never run into my teammate or block him that aggressively and that late on purpose.”

Smoothing things over before a feud develops is top priority for Hendrick Motorsports at the moment.

After the race, Larson’s crew chief Cliff Daniels spoke with Elliott’s crew chief Alan Gustafson to “take his share of the responsibility.”

“They’re great teammates, always have been, and I know we?re all good teammates together,” Daniels said. ?Like he said, that?s nothing that (Larson) would ever do intentionally, and that?s a tough racing deal. I don’t blame Chase at all for what could have been the race-winning move, and he just told his side of the story.”

Today I made a mistake. I will take full responsibility for what happen on track today. I was worried more about the 22 and not the 9. It was a late call on me it had nothing to do with Kyle.

Even Hendrick Motorsports general manager Jeff Andrews chimed in regarding the incident, making it clear that he and other Hendrick higher-ups would be facilitating a conversation between Larson and Elliott.

“Hopefully [Chase and Kyle] can get to a good spot and kind of step back and look at the data and really watch what happened there,” Andrews said. “And then of course, as a group, Jeff Gordon, Chad (Knaus) and myself and Mr. (Rick) Hendrick, of course, we want to speak to them.”

“We want to go to Las Vegas in a good spot.”