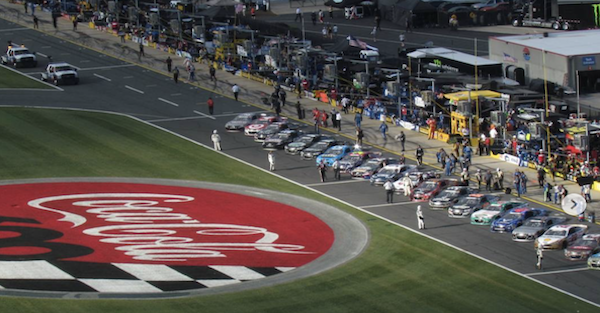 It’s hard to say if the end result would have been the same this Sunday for the Coca-Cola 600 without the fourth stage. A surprise winner in Austin Dillon strengthened some concern with using the new 4 stage format. Previously, the 600 mile race was split up with an intermission at lap 115 and 230. The new format used at the longest NASCAR race was a break at lap 100, 200, 300 and then the final stage going to lap 400.

“You look at the way Charlotte was laid out and the length of the race, it was just sort of natural to add another one to break it up a little further and make a few more moments.  When you make stages in the race, there’s a lot of things that go into the decisions about how they lay out. One of the primary concerns is fuel mileage and how far they can go on fuel. We don’t want to end up with a stage break right on top of what would be a fuel window where it could get a little messy with that situation. The natural places for the 600 was four 100-lap segments.”

It’s not clear whether we will see the 4th stage used again this year, Miller had this to say:

“The stage racing format has pretty much played out like we had hoped, has created some moments and has gained acceptance, but the 600 does present a unique opportunity over the other races.  We’re always looking, but I don’t see anything else on the horizon for the remainder this year. But we’ll certainly kind of re-evaluate as we wind down the year and see if there’s adjustments that would make sense for ’18.”

Debate was sparked earlier this month when the 4th stage was announced.  By adding the additional stage, possible points earned has increased to 70. Winning one stage equals 10 points plus one playoff point.  Winning the final stage gives you 40 points and 5 playoff points.  Some argue that the four Crown Jewels during the year should equal the same amount of points. Others think it makes perfect sense to award drivers with more points as this is the longest, most grueling race.

It’s normal for any change to be met with doubt but in this case the moves does look like a perfect fit for this particular race.  As the year goes on more positive response has been seen than negative showing that this change may be here to stay.

Related: Listen to the best in-car chatter from NASCAR’s Coca-Cola 600