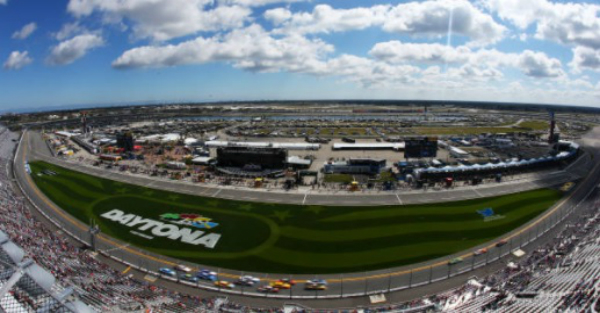 So the Great American Race is already known for, you know, the race. The Daytona 500 is as big as it gets.

But this year, Daytona has some serious star power. The race added to that when the speedway announced, in a press release, that Charlize Theron would serve as the honorary starter.

NEWS: @CharlizeAfrica, star of the upcoming film @gringomovie, to serve as the honorary starter for the 2018 #DAYTONA500.

Theron won an Oscar and Golden Globe in 2003 for her portrayal of the serial killer Aileen Wournos in ?Monster.?

Daytona has already announced that Rascal Flatts will headline the pre-race show, and Dale Earnhardt Jr. will  serve as grand marshal.

Theron stars in and produces the upcoming Amazon Studios film ?Gringo,? under her production company Denver and Delilah?s banner. The film will be released in theaters nationwide on March 9. ?Gringo?, a dark comedy mixed with white knuckle action and dramatic intrigue, explores the battle of survival for businessman Harold Soyinka when he finds himself crossing the line from law abiding citizen to wanted criminal. The film also stars David Oyelowo, Joel Edgerton, Amanda Seyfried, Yul Vazquez, Thandie Newton and Sharlto Copley.

Theron won both an Oscar and Golden Globe for Best Actress in 2003 for her stunning portrayal of serial killer Aileen Wournos in ?Monster.? She has also starred in such notable films as ?The Cider House Rules? (1999); ?The Italian Job? (2003); and ?North Country? (2005), which resulted in Golden Globe and Oscar nominations. She has most recently been seen in box office hits such as ?Atomic Blonde?, ?The Fate of the Furious? and ?Mad Max: Fury Road? as well as a producer on the Netflix original series ?Mindhunter?.

?Charlize Theron is the latest in a long line of accomplished entertainers, athletes, U.S. military members and others to serve as the Honorary Starter for the DAYTONA 500,? said Daytona International Speedway President Chip Wile. ?We are thrilled to have her as our guest at ?The Great American Race? and we are certain race fans will feel the same way.?

In 2017, Theron was seen in The Fate of The Furious, the eighth installment of The Fast and The Furious franchise, alongside Vin Diesel, Dwayne Johnson and Michelle Rodriguez. Later that year, she produced and starred in Universal Pictures? Atomic Blonde, alongside James McAvoy. She also served as an executive producer of the Netflix original series Mindhunter, under her production company Denver and Delilah?s banner. Mindhunter was recently picked up for a second season.

Next up, Theron will produce and star in Gringo alongside Joel Edgerton and Amanda Seyfried as well as the new Jason Reitman film, Tully, both due out in 2018. She most recently wrapped production on the Lionsgate comedy Flarsky in Montreal, of which she produces as well.

In addition to Theron?s acting success and principal involvement with her production company Denver & Delilah, Charlize serves as a United Nations Messenger of Peace and founder of the Charlize Theron Africa Outreach Project (CTAOP). CTAOP?s mission is to help keep African youth safe from HIV through its support of on the ground, community-engaged organizations. CTAOP serves as a vehicle for communities to empower themselves and their youth in order to prevent the spread of HIV. Learn more about CTAOP at http://www.charlizeafricaoutreach.org.

Daytona International Speedway is the world?s only motorsports stadium and was awarded the SportsBusiness Journal?s prestigious Sports Business Award for Sports Facility of the Year in 2016. Daytona International Speedway is the home of “The Great American Race? ? the DAYTONA 500. Though the season-opening Monster Energy NASCAR Cup Series event garners most of the attention ? as well as the largest audience in motorsports ? the approximately 500-acre motorsports complex, also known as the ?World Center of Racing,? boasts the most diverse schedule of racing on the globe. In addition to at least nine major event weekends, the Speedway grounds are also used extensively for events that include concerts, civic and social gatherings, car shows, photo shoots, production vehicle testing and police motorcycle training.