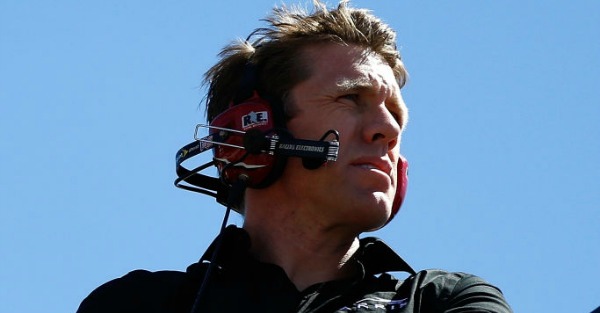 A highly modified Toyota Land Cruiser was able to hit 230 mph at the Mojave Air and Space Port in Mojave, California. To pilot this radical alternative to the family Minivan was none other than former NASCAR driver Carl Edwards.  Although Edwards is no stranger to speed, this little endeavor was a last minute decision as he stated:

” I woke up about literally at like two this morning and was like, what am I doing?  Paul just sent me a text, hey you want to do this?  I was like sure, I didn’t ask a lot of questions.”

Edwards actually flew to the runway in his own plane landing in the same spot he would set the record.  His experience piloting the large SUV was a nail bitter as he reported to FOXSports.com:

Accomplishing this task was not easy and the engineers at Toyota really had their work cut out for them. To power the “Land Speed Cruiser,” they started with a familiar platform using the Toyota 3UR-FE V-8 engine that normally comes in the Land Cruiser. They replaced the rotating assembly and intake manifold along with adding two large Garrett Turbochargers. This combo was good for 2,000 horsepower at 55 psi of boost. Much more than just the powertrain was modified for this Hail Mary land speed record.  The entire chassis was modified for the Land Cruiser to sit very low to the ground, enhancing its ability to cut through the air and keep it stable at such high speeds.

Toyota claims that this Land Cruiser could go even faster and was limited only by the length of the runway. After this successful run, there’s no doubt Edwards would come back for round two. A speed junkie like him can’t stay away forever. His plans for after the record setting run were a little slower in pace as he stated: