A recently retired driver is already considering returning to racing 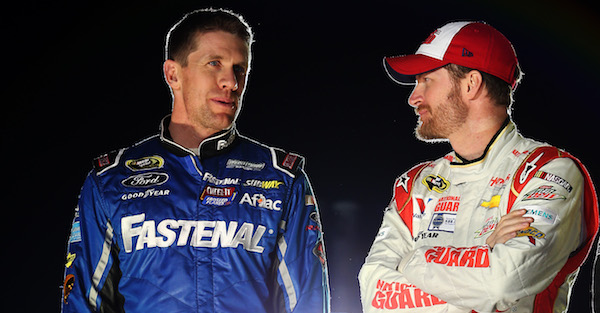 Carl Edwards surprisingly retired from full time racing after last year’s finale at Homestead, and the 38-year-old hasn’t expressed a desire to return to racing since his retirement.

Until now, that is.

Edwards was in St. Louis over the weekend to receive the Musial Award for sportsmanship, and he admitted to STL Motorsport Magazine that he wished he was racing for the championship again at Homestead.

“Monday or Tuesday I woke up and thought, ‘Man, I?d like to be going to Homestead to battle for another championship,'” Edwards said. “This is the first time I?ve really thought it would be fun to be at the race track.”

But if Edwards does return, it likely won’t be in the Cup Series. He said he’d like to race in dirt races and misses competing in them.

“I love dirt racing,” Edwards said. “I miss it. Basically for me, I was riding my bicycle the other day and I was thinking. ‘I just about got this door closed in my mind. It?s shut.’ I?m just getting to where I can get up in the morning and not think about racing and kind of move on.

“But there will be a time where it?ll be real hard not to go up to Moberly (Randolph County Raceway in Moberly, Missouri) or come over here to Pevely (Federated Auto Parts Raceway at I-55 in Pevely, Missouri) or something and race a little bit. When that time comes it?ll be a lot of fun.”

So, while it’s unlikely we see Edwards back in the Cup Series, it’s good for race fans that he still has the desire to race at some level.