One playoff contender’s day ended early at the Brickyard 400 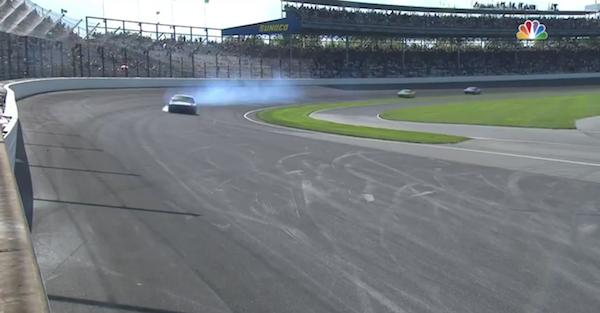 Chase Elliott’s day at the Brickyard 400 came to an end before the end of Stage 1 due to engine failure.

Elliott was heard saying it felt like he was “down a cylinder” early in Stage 1, and his team was able to work on the car during a competition caution.

"It's like I'm down a cylinder." @ChaseElliott feels he's down on power early at @IMS! Competition caution coming soon. #NASCARonNBC pic.twitter.com/osFzO9eEPl

But Elliott’s engine troubles persisted, and smoke appeared from his No. 24 car a few laps later.

.@ChaseElliott's day is done. His engine blew just before the end of Stage 1. #NASCARonNBC #Brickyard400 pic.twitter.com/KaEmbc0aj1

According to NBC, this was the first time in Elliott’s career that he had engine failure.

Believe it or not, that was @chaseelliott's first career engine failure in the #NASCAR Cup Series.

Elliott said he’s been racing with Hendrick Motorsports engines since 2013, and this is the first time he’s had an engine issues.

"This is the first engine problem I've ever had (with Hendrick), so I'll take those odds all day long." – @ChaseElliott#NASCARonNBC pic.twitter.com/fUeZ80Mp7S

Elliott is still in good shape for the playoffs despite not having a win. He is currently No. 6 in the standings, but he is far from a lock to reach the postseason.