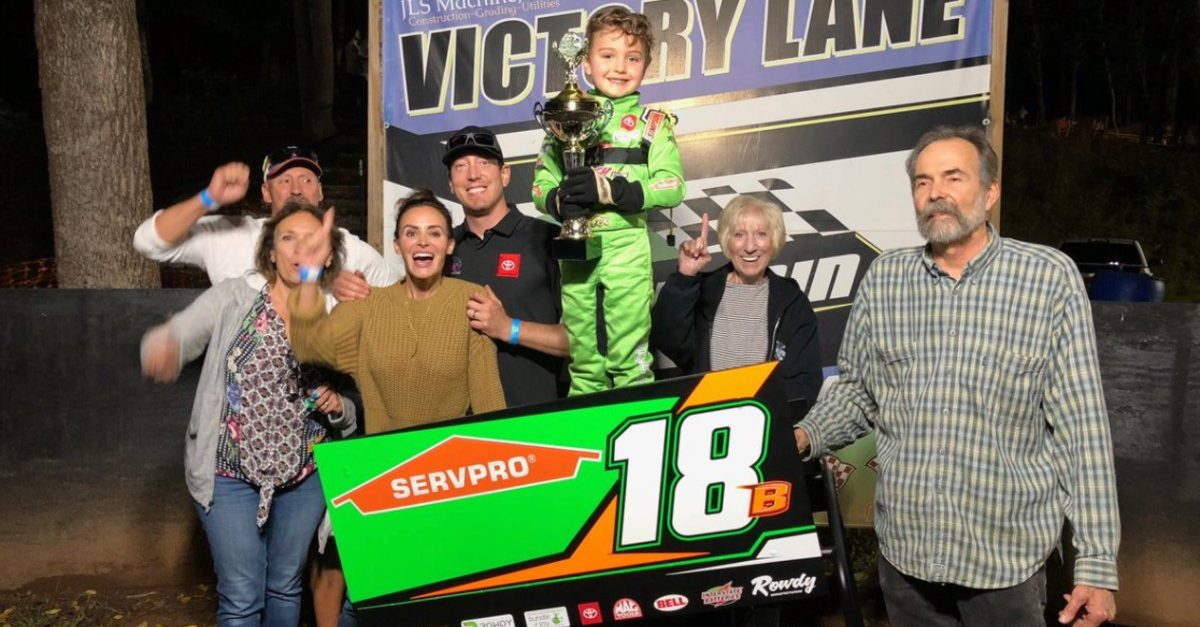 Kyle Busch’s sixth-place performance in the NASCAR Cup Series playoff race at Las Vegas Motor Speedway — a race that his brother Kurt Busch actually ended up winning — may not have been enough for his advancement into the Round of 8. But, while the driver of the No. 18 Toyota race car for Joe Gibbs Racing wasn’t able to get his much-needed win, the longtime racer was able to experience victory vicariously through his five-year-old son Brexton Busch.

On September 26, the day before the Vegas playoff race, the Busch family, including Kyle and wife Samantha, got to celebrate Brexton’s first racing win in the No. 18B Beginner Box Stock Series. The series competes at Millbridge Speedway and Mountain Creek Speedway in North Carolina, though Brexton’s win came at Mountain Creek.

In a Twitter post showcasing Brexton’s big victory lane moment, Kyle wrote, “What a great family night at the track! Brexton Busch won his first race. So proud of him!”

What a great family night at the track! @brextonbusch won his first race 🏁 So proud of him! pic.twitter.com/DkOIGpysvR

What an awesome family moment. If that doesn’t warm your heart, you need to check your pulse.

Now, as you may know, Kyle Busch is more than just a NASCAR driver, as he and Samantha Busch are also the co-owners of Kyle Busch Motorsports, which currently competes in the NASCAR Gander RV & Outdoors Truck Series, the CARS Tour, the ARCA/CRA Super Series, and Southern Super Series.

Obviously, Brexton has a long way to go before he even starts thinking about some of those bigger racing series, but with a dad who’s got two Cup Series championships under his belt and an uncle with one, he clearly comes from good stock (pun intended).

How awesome would that be if the kid got to race for his pops one day?! Talk about one epic motorsports dynasty!