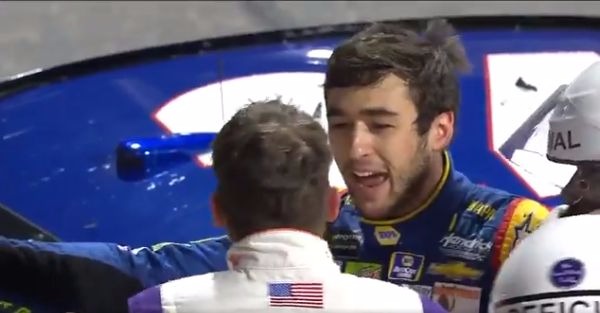 The Denny Hamlin and Chase Elliott dust-up is still a hot conversation in NASCAR, even days after the race. Several in the sport have praised the young Elliott for standing up to Hamlin and his dirty move, and now, another voice has joined the chorus.

?I think Chase handled himself very well,? Brent Dewar , the NASCAR president, told NASCAR.com. ?I would say what we?ve seen this year is our fan base getting behind our young guns. We saw it at Pocono with Ryan Blaney?s win, we saw it in Bristol in the summer when Erik Jones was leading with fans on their feet. We clearly saw it in Martinsville. Our young drivers are not only great personalities, they?re also really good drivers.”

NASCAR is looking for as many personalities as it can get, especially with Dale Earnhardt Jr. retiring and the popular Danica Patrick possibly on her way out of the sport. Dewar took the time to laud his young drivers — “young guns” as he calls them

?You saw bumping and banging between Ryan Blaney and the veterans in Martinsville, and he wasn?t backing down. You saw how Chase handled himself. I think for our core fans, how these young drivers are representing the sport is incredible. And they?re being rewarded by building their fan base.?

With only three laps remaining in the race, Hamlin rode the bumper of leader Elliott’s car heading into the corner, forcing the No. 24 Chevy to lose control and spin out.

Upset with his 27th-place finish as result of the wreck, Elliott confronted Hamlin after the race to voice his frustrations. With TV cameras pointed in their direction, you can see Elliott mouth the words, “You wrecked me!” while the two drivers were face-to-face on the track.

The two men were interviewed by NASCAR reporters shortly after their shouting match and while Hamlin tried to defend his actions, Elliott recalled a lesson that his mother taught him a long time ago.

No doubt, @chaseelliott was raised right. The poise the kid has and as young as he is phenomenal, his parents should be very proud!!

Fans at Martinsville roared with applause upon hearing Elliott’s interview and booed just as feverishly when Hamlin took his turn on the microphone to say the following:

“I’m not trying to say I wrecked him on purpose. I tried to move him out of the way and (Elliott) spun out.”

On the season, the 21-year-old Elliott has 18 top-10s, 10 top-5s, and one pole, but has yet to win his first race even though he’s clearly won the affection of many NASCAR fans.

However, NASCAR America analyst Jeff Burton thinks this confrontation was a pivotal point in Elliott’s career, especially when it comes to being taken seriously on track by all his competitors.

?What I saw was him (Elliott) looking Denny Hamlin in the eye and said, ?You wrecked me.? And I was glad to see that because that?s what happened, he got wrecked and he should stand up for himself,” Burton said,” according to NBC Sports. “I?m glad he showed his emotion and stood up to Denny Hamlin because that took an opportunity to win a championship away from him because he wrecked him and had a terrible finish. He should have stood up for himself.?

Elliott is currently 8th in the point standings and will probably need to win at either Texas or Phoenix to advance to the Championship 4 race at Homestead.