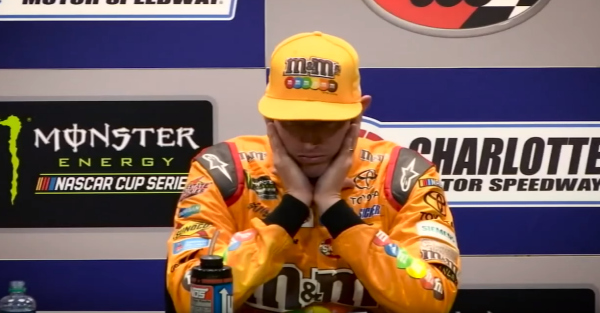 Second place is not good enough for Kyle Busch. After falling short in the Coca-Cola 600 after Austin Dillon’s fuel gamble paid off for the win. Psychologists have documented this phenomenon before and attribute it to counterfactual thinking. In other words, people will compare their accomplishments to what could have been. The pain of being right there but leaving without a win is often much worse than barely having a shot and just being happy to be on the podium. Busch was absolutely feeling that during this press conference.

"If you ain't first … you're last." No one hates losing more than Kyle Busch.#NASCAR pic.twitter.com/GFEXWLfkPJ

Reactions unexpectedly came pouring in. They ranged from applauding Busch’s refusal to accept anything but a win, to ones from people who thought placing second is no excuse to act that way like Brad Keselowski, who had this to say:

Not sure how or when "hating losing" got defined in this manner, but I'm pretty sure it's the wrong way… https://t.co/HqEPTGTBDs

Idk 😐
Maybe I should keep my mouth shut. But I was taught to hate losing by working harder next time, not by being disrespectful to others.

Andy Graves, The technical director at Toyota Racing Development, made it clear that did not appreciate Keselowki’s comments:

I agree with you @keselowski. You should have kept your mouth shut. https://t.co/Dykk5GYMhc

All the best to you and yours.

Keselowski took the high road in response, but it is clear that Busch’s press conference is rubbing other drivers the wrong way. Maybe they listened to Darrell Waltrip’s whole, “NASCAR needs villians” thing.