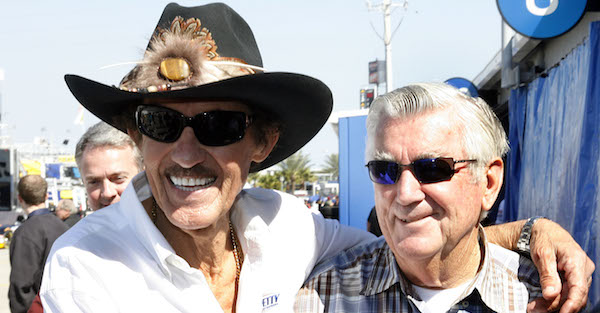 On the all-time NASCAR wins leaderboard, Bobby Allison currently sits in a tie with Darrell Waltrip for fourth in history with 84 wins.

Allison trails only Richard Petty (200), David Pearson (105) and Jeff Gordon (93), but he technically should be in fourth place alone with 85 wins. However, NASCAR officials refuse to acknowledge Allison’s win from a 1971 race at Winston-Salem, North Carolina.

Allison won the race, and he beat Richard Petty, David Marcis, Buck Baker and Jim Paschal among others. He passed every post-race inspection, and there was no disputing the fact that he won the race fair and square.

But Allison was driving a Mustang since NASCAR was promoting Grand American races for what they called pony cars. The pony cars included Mustangs, Camaros, Cougars and Firebirds, and those cars weren’t typically used in NASCAR races.

Related: A family with deep NASCAR ties is considering putting in a bid to buy an NFL team

Richard Petty wasn’t happy with the results and complained about them.

“I figured something like this would happen,” Petty said at the time according to Autoweek. “They’ll probably win all these (combination) races. (Cup) racing isn’t supposed to be filled with Mustangs and Camaros.”

Petty was asked about it again in July at Daytona, and his stance hasn’t changed.

Apparently some people thought the GA drivers wouldn’t get credit if they won the race, but Marcis and Richard Childress said they don’t recall hearing about that stipulation.

So, Allison is only credited for 84 wins. In some places, Allison is credited with 10 Cup wins in 1971, but in others he’s credited with 11 wins. However, he hasn’t been credited with the win officially by NASCAR. He pleaded with former NASCAR CEO Brian France Jr., but he never got around to admitting they made the mistake.

If NASCAR retroactively gave Allison the win, he’d move in to sole possession of fourth on the all-time wins list. He deserves to be credited with the win, so perhaps the 80-year-old will get the win at some point.