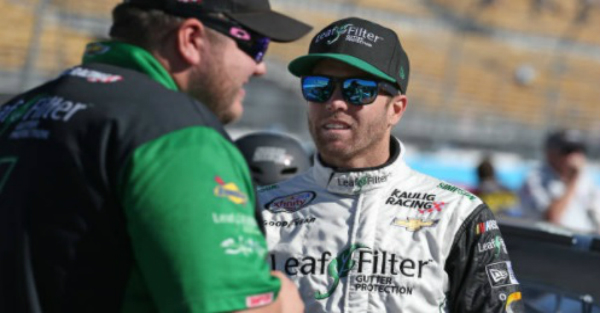 Unfortunately, NASCAR like any other sport is a business and sometimes decisions are made that might not necessarily be fair to all parties involved.

Blake Koch is learning that the hard way as he lost his ride for the upcoming Xfinity season to recently displaced truck series driver Ryan Truex. But in a true show of sportsmanship, Koch is taking the news in stride.

RELATED: Ryan Truex gets the best news possible after he shockingly lost his ride

In an interview on SiriusXM NASCAR Radio, Koch had a chance to tell his side of the story and how it’s affected him. He was asked why he would not be returning to Kaulig Racing for 2018 and in being true to himself he said things aren’t gong to change with his positive attitude.

“Everybody kinda’ knows me for being happy and smiling and positive attitude and that’s not going to change,” Koch said. “I’m still very excited about what we’ve been able to accomplish over the last couple years.”

“Matt Kaulig and myself are still great friends and everybody at Kaulig Racing is all on good terms,” added Koch.

Coming off a season that saw Koch finish in 11th place on the year with five top-10 finishes, he had a better year than the majority of the field. As of now, Koch’s future in the Xfinity Series is uncertain, but hopefully he isn’t without a ride for too long.

“I’m looking forward to what lies ahead, just have to figure that out” Koch said. “Definitely not going to be sitting on the couch waiting, I’m going to go out and hustle, find some sponsors and that’s the key, you’ve got to fins sponsorship.

“So I’m going to go do that and get back in a race car.” added Koch.

Koch explained that Leaf Filter Gutter Protection wouldn’t be the primary sponsor for the No. 11 car this season, which was detrimental in moving forward for 2018. He also said he’s proud that the No. 11 was attractive enough for Truex and his sponsors to pursue the ride for the upcoming season.

Koch was asked when he found out his ride would be going to someone else for 2018, he shared that he new they were looking for a driver and a sponsor and that he didn’t have time to get one.

“I got the official word a couple of days ago, but I pretty much knew in mid-December that I was going to have to figure something out,” Koch said. “It wasn’t a complete shock, because nothing was really done until yesterday.”

The rest of the interview on SiriusXM NASCAR is available below: