NASCAR is planning to reshape the two-mile Auto Club Speedway into a half-mile short track, according to a report by The Athletic. Having pitched its site plans to San Bernardino County on Tuesday, the auto sanctioning body expects the new Fontana, California-area track to be ready to go by 2022.

"We are still very early in the process, but we are excited about what this ambitious project could mean for our loyal fans in Southern California," Craig Neeb, NASCAR executive vice president and chief innovation officer, said in a statement. "This is our first step towards creating a state-of-the-art facility that would deliver the intense short-track racing our fans love, an intimate viewing experience, and upgraded suites and hospitality areas that would position Auto Club Speedway among the top entertainment venues in the market."

The track would be located where the current track's frontstretch and pit road are, while it would also have long straightaways similar to Martinsville Speedway and banked corners resembling those at Bristol Motor Speedway. Currently, the only short tracks that host NASCAR Cup Series races are Martinsville, Bristol and Richmond Raceway,

Below is a rendering of the proposed Auto Club short track. 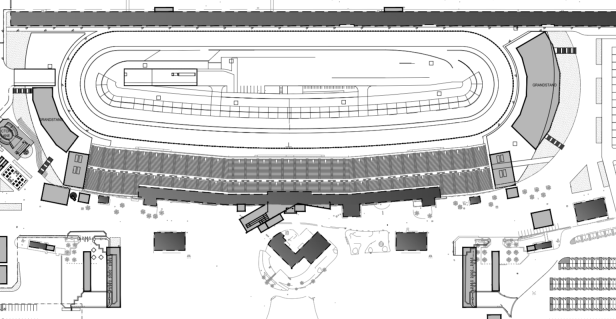 1. Opened in 1997, Auto Club Speedway was called California Speedway until 2008. It was renamed when Southern California Automobile Club purchased the naming rights.

2. Jeff Gordon won the first Cup race there at the 1997 California 500, driving the No. 24 Chevrolet in his fifth full year with Hendrick Motorsports.

4. The track was used as Daytona International Speedway in the Ford v Ferrari movie, while such films as Charlie's Angles, Herbie: Fully Loaded, and The Bucket List also featured scenes from the track.

5. There have been five confirmed fatalities at the track, the most recent occurring in 2010.