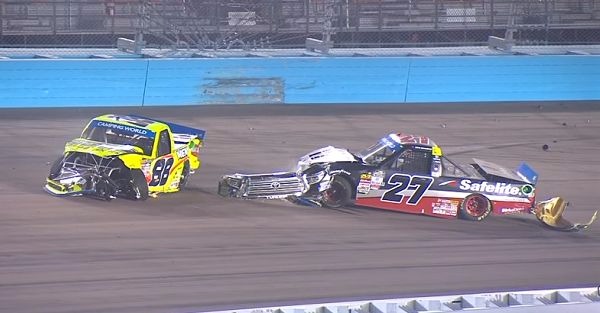 If rubbin’ is racin’, then Austin Cindric raced his heart out Friday night at Phoenix Raceway.

With only 21 laps remaining in the Lucas Oil 150, Cindric and Ben Rhodes were competing for the final spot in next week’s championship race. Both drivers had just made pit stops and lost valuable track position prior to the restart, which decided the fates of both drivers.

Rhodes restarted ninth and Cindric 12th. When the green flag dropped, Cindric made a quick move to the inside and had a run on Rhodes. Seeing this, Rhodes came down the track in an attempt to block the No. 19 Ford, but the trucks made contact, which sent the No. 27 Toyota into the wall, effectively crushing Rhodes’ hopes of a NASCAR Truck Series championship, at least in 2017.

“I had a good run, Ben went to block, and I was there,” Cindric said, according to ESPN.com. “I can’t get pushed around because that was my chance, and he was better than we were all night. Nothing intentional there. I tried to get a run and held my ground.”

The crew chief for Rhodes, Eddie Troconis, had a different take on the situation and even suggested that NASCAR should take drastic action in response to the crash.

“I believe NASCAR should park them, they should penalize them,” Troconis said, according to NASCAR.com. “They’re going to hurt someone one of these days. … It was a cheap shot from them. If they want to go like that, that’s fine.”

Defending series champion Johnny Saughter won the race. Saughter, along with Christopher Bell, Matt Crafton, and Cindric, will duke it out for the 2017 Truck Series Championship at Homestead.

However, one person involved in the Truck Series made it clear he thinks these are the four drivers NASCAR wanted in the championship race.

As you can see, spotter Lloyd Garner clearly didn’t appreciate the way Cindric punched his ticket to Homestead, , according to the Tweet by NASCAR journalist Matt Weaver.

Last night was a tough deal. I knew in my gut what was about to happen. NASCAR wanted it that way. They got it… it’s a shame that you prepare and do everything you can to take the next step, only to be wrecked in an all out attempt to make it to the next race with meaning. I will leave it right there. Simply put, he wasn’t going to beat us racing, the 19 wrecked his way to homestead. I can live with that. On the New Smyrna for Sunday’s Governor’s Cup.