The race at Daytona proved that a big change is needed 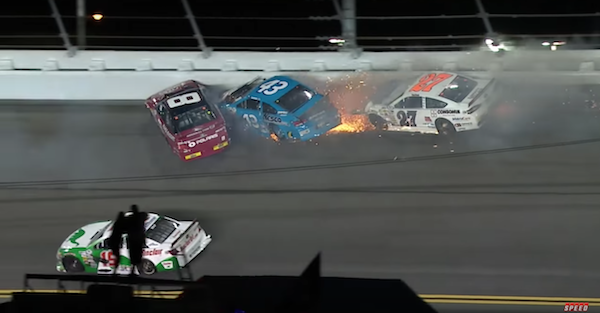 The ending of the Lucas Oil 200 at Daytona International Speedway for the ARCA Racing Series was a cluttered, wreck-filled mess.

Crashes can be fun for fans and can provide entertainment, but when a series of crashes cause several late restarts and decide the ending of a race, it ends up looking like a disaster.

ARCA rules state that all races must finish under green ? including restrictor plate races. So, when a race goes to overtime at Daytona or Talladega, it usually results in chaos.

In the 2018 Lucas Oil 200 on Saturday, Bret Holes and Gus Dean crashed on the backstretch, which led to an overtime restart even though Sheldon Creed should’ve won the race.

Instead of the race ending, it went to overtime, where four cars wrecked and created a chaotic ending to the race.

As Matt Weaver of AutoWeek points out, ARCA needs to re-evaluate its overtime philosophy at restrictor plate races. Races at Daytona and Talladega should move to a traditional green-white-checkered instead of the current format.

If the change was made, it would eliminate the possibility of races ending in a cluttered mess like they did on Saturday. It makes sense for short tracks and road courses to finish under green, and it usually results quality finishes to races.

But it wasn’t a good look for the sport to end a race the way they did for the ARCA Series. Other races can keep the same format, but a change it worth looking into for races at Daytona and Talladega.