After Less Than a Week of Celebrating, NASCAR Champ Kyle Larson Is Already Looking Ahead to 2022 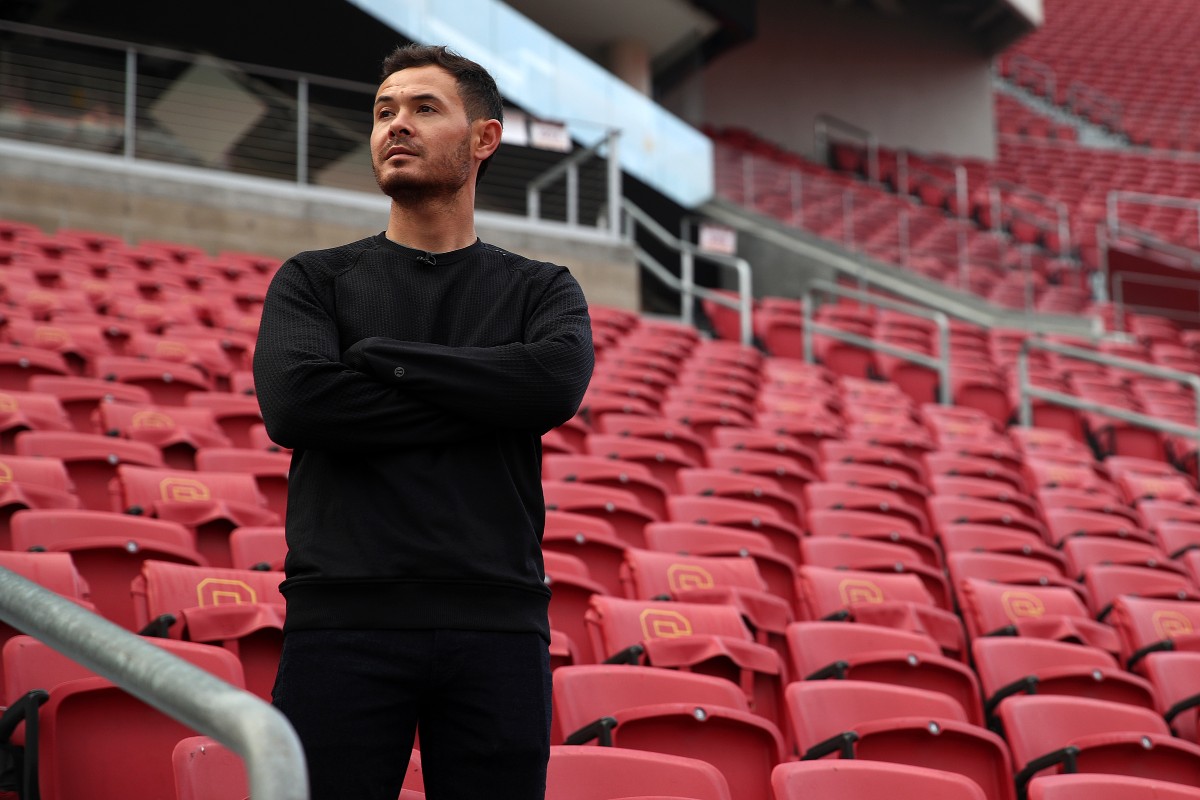 LOS ANGELES (AP) — Kyle Larson was running on empty, still trying to recover from the celebration.

His wife had a migraine and his crew chief was last seen dancing somewhere back in Arizona at the Hendrick Motorsports bash. The NASCAR champion got a pointless two hours sleep before he was whisked off to Los Angeles for a whirlwind tour with his brand new Cup.

When he hit I-10 headed toward L.A. Live, the electronic interstate billboards flashed a promo for NASCAR’s big return to La-La-Land. It was still dark on Tuesday when Larson got his first look at Los Angeles Memorial Coliseum, where NASCAR will kick off 2022 with a Feb. 6 exhibition all-star race.

It will be called the Busch Light Clash, and a version of it has been run in Florida every year since its 1979 inception as the kickoff for the Daytona 500, the marquee event on the NASCAR calendar. But NASCAR has promised to do big things, and this race at the Coliseum is scheduled just a week ahead of the Super Bowl, to be played less than 10 miles away at SoFi Stadium.

So here was Larson in California, his remarkable comeback season and brand-new title earned Sunday yet to really sink in. Because of COVID-19 protocols, one of the strongest seasons in NASCAR history had never been celebrated between Larson and his No. 5 team though they made up for lost time in Scottsdale, Arizona, where the entire team celebrated until closing time at Whiskey Row before wandering over to Jeff Gordon’s nearby hotel.

“That was the first time I’ve ever gone out with my team and everybody let loose,” Larson said. “To see everybody’s personalities come out when they get some alcohol in their system was fun, and getting to know them even better.”

Still, standing inside a sea of red seats at the Coliseum after sunrise, Larson had the sudden urge to get 2022 started.

“The season just ended but now that we’re here, I’m already excited for the next season to begin,” Larson told The Associated Press on Tuesday as he toured the historic venue.

Larson came ready to do the promotional work, too. He grabbed a steak at Fleming’s at LA Live before NASCAR slotted him courtside at Monday night’s game between the Charlotte Hornets and Los Angeles Lakers. The 29-year-old Northern California native — Elk Grove — was surprised to find that Staples Center fans recognized him, but he and Katelyn left at halftime for some much-needed sleep. He had to be at Coliseum by sunrise, along with the Cup.

He figures it might start to settle in that he’s the champion after next month’s awards ceremony in Nashville. Larson is used to winning races — albeit never a championship at the highest level — and so far a text from Blake Shelton among the 400-plus he received has been the only difference between Sunday’s win and the 10 that came before it this season.

But the truth is that Larson has finally reached the potential predicted a decade ago by Gordon and Tony Stewart when Chip Ganassi took the 19-year-old out of sprint cars to prove Larson was as good as they said he was.

“I felt like I could do it, but once I was not, I was like, ‘Maybe I’m just not a stock car racer? I’m just a dirt guy?'” Larson told AP. “I’m proud to finally live up to the hype because for a while, man, I was definitely the most overhyped guy in the sport.”

On this day, the championship had yet to change anything about Larson. He’s headed right back to dirt racing and has a three-day event coming up next weekend at quarter-mile Placerville Speedway in California, followed by races at Merced Speedway and Ventura Raceway.

At the Coliseum, one of the most venerable stadiums in the world, Larson was most interested in learning about a venue where he can get another win. He wanted to know where was the garage (a staging area off Phil Robertson Lane), what happens if there’s a crash (no live pit stops), and what portions of the football stadium will be race track.

The quarter-mile, purpose-built asphalt track will be constructed over the field beginning Dec. 20 and removed after the race. The race will be 150 laps for 23 invited drivers, and only Larson so far is in the field. Everyone else will have to qualify through heat races.

It will be the smallest track NASCAR has ever competed on and create perhaps the rowdy, door-banging atmosphere of a typical night at, say, Bowman Gray Stadium in Winston Salem, North Carolina. As Larson stood on the red dirt between what will eventually be the first and second turns, he got a good look at the walls, the vastness of the stadium — and the comfortable, familiar ground he loves to race on.

“This feels familiar,” he smiled, his feet crunching in the dirt.