“I Needed to Get Back in the Car,” Says 71-Year-Old Drag Racer John Force After Hiatus 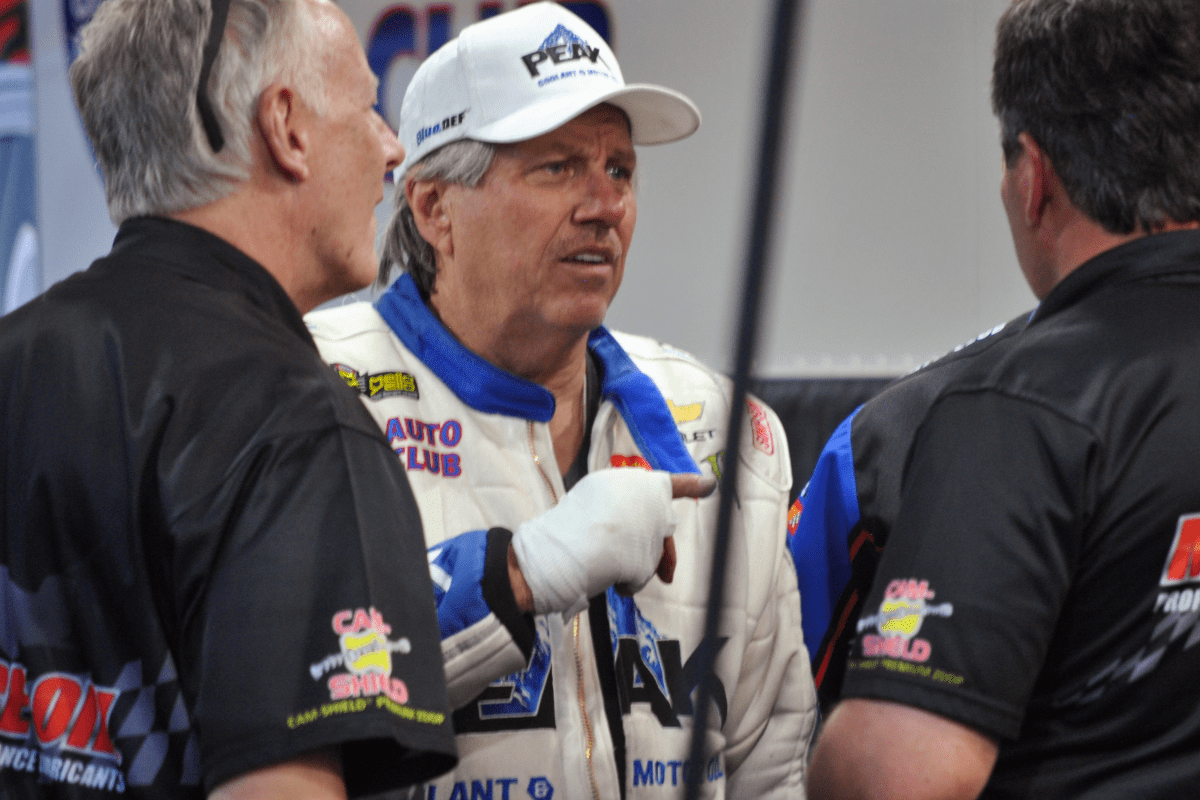 GAINESVILLE, Fla. (AP) ? John Force climbs on his scooter, turns the key and takes off. He weaves between parked cars and waiting dragsters. He dodges fellow drivers, track workers and fans on his way from the pits to the strip.

It?s the slowest pass he?ll make all week at Gainesville Raceway. It?s sure to be one of the most rewarding.

?Welcome back, John,? shouts one bystander.

?Glad to have you back,? yells a competitor.

Force gets waves, head nods and hat tips, all signs of respect for one of the most talented drivers and undoubtedly the best salesman to ever make a living at 300 mph.

The 71-year-old Force is back with the NHRA after a yearlong hiatus prompted by the pandemic. The 16-time champion and patriarch of drag racing?s first family will make his return in the season-opening Gatornationals that begin Friday.

?I had it for 40-something years and I took it for granted,? Force said Thursday. ?When it was gone, I?m sitting over there and nobody cares to talk to me and then you get sick looking at all the championships and trophies. I needed to get back in the car.?

Force reluctantly walked away last summer, opting not to race when the NHRA returned in July following a five-month break. It was a business decision made to salvage a company he built over five decades that had an $8.4 million annual payroll.

He looked at the depleted number of races and felt it would be better to sit out than try to give all-important sponsors less than what they?ve come to expect from one of drag racing?s top teams.

?To keep it all going, I would have been in trouble,? Force said. ?And I couldn?t have recovered. I wouldn?t be here now if I would have stayed. That?s a fact.?

Force ?spent a few million? out of pocket to stay afloat in 2020. He lost about half his 100-person staff at the start of the pandemic. Some of them landed at other companies in Indianapolis. Many of those who remained had their hours cut.

Instead of building dragsters, John Force Racing started outsourcing projects for other teams in other racing series. He says his team ?survived? the pandemic, but acknowledged it is still going.

?I brought everyone back and now I?m going to pay them no matter what happens,? he added. ?I made a lot of money over the years and I?m going to spend it on keeping this thing afloat and to keep my company.?

John Force Racing will start the season with three of its four cars. Force was able to maintain sponsorship for himself, daughter and 2017 Top Fuel champion Brittany Force, and team president and three-time Funny Car champion Robert Hight.

JFR continues to search for sponsorship for driver Austin Prock, who remains employed and working as a crew member.

Hight had the unenviable task of telling Force the finances in 2020 wouldn?t work. Force parked a chair in front of Hight?s office daily and hounded him about the numbers.

?It was no fun,? Hight said. ?John likes to micromanage. He likes to be involved in everything. He did not want to sit out, but it wouldn?t have worked for us financially. Now, we?re back. We have everything we need, including the people. We?re hungry and we?ve got to get it done.?

Neither Hight nor Force could bring themselves to watch races in 2020. Hight spent the extra time watching his daughter drive a junior dragster and got back into trap shooting. Force watched three grandkids race and welcomed another grandchild into the world.

He also hit the gym, dropping nearly 25 pounds ? so much weight that he had to get his fire suits refitted.

?I learned how bad I was abusing my body,? said Force, who quit drinking after a series of crashes a few years ago. ?I hated it mentally, but I think this time off did me good. It helped my health. My guys are saying you look like a different driver already.?

The results are evident, too. Despite having not been in a dragster since February 2020, Force turned in the low elapsed time during Funny Car testing last week in West Palm Beach. Hight posted the top speed in the class, and Brittany Force notched the best Top Fuel pass.

?I didn?t know if we would come out here and stink,? John Force said. ?Up to now, we look OK.?

The real passes begin Friday in front of a reduced-capacity crowd, quite possibly the smallest one Force has raced in front of during his storied career. Regardless how many show up, he?s looking forward to it after spending the past year feeling like he let everyone around him down.

?I?m just thankful to be back here and doing what I love,? he said.