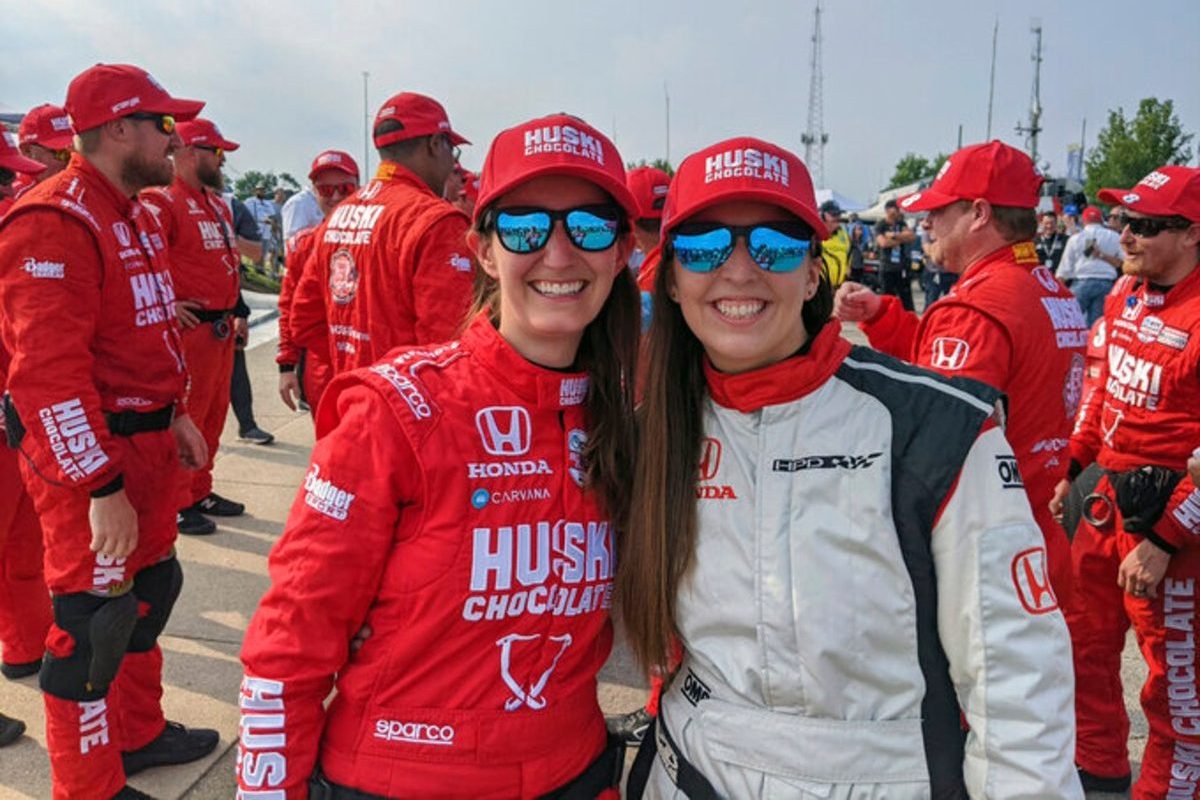 Danielle Shepherd grew up in Ohio a racing fan, cheering wildly for Jimmy Vasser in the 180-degree Keyhole turn at Mid-Ohio Sports Car Course. It didn’t hit her until she was in college and had ditched her plans to study Spanish and international relations that she realized she might someday work with her favorite driver.

Angela Ashmore tagged along with her father on weekends to Berlin Raceway in Michigan, got hooked on cars and NASCAR and Dale Earnhardt, and set a path to work in racing. She first thought she could be a driver, then her dad honed in on her math and science skills and suggested an engineering career.

Both women now play key roles for the IndyCar program at Chip Ganassi Racing. Same for Kate Gundlach at Arrow McLaren SP and Nicole Rotondo from Honda Performance Development. The four female engineers are all part of a streak in which women were part of winning IndyCar victories the past three races.

Ashmore made her first trip to victory lane alongside Rotondo at Detroit when Marcus Ericsson won his first career IndyCar race. The next day, Pato O’Ward won for AMSP and Gundlach got to celebrate. Then it was Shepherd in victory lane at Road America with Alex Palou, a two-time winner this season and the IndyCar points leader.

The series races Sunday at Mid-Ohio ? Shepherd’s home track ? and it is possible another woman will be celebrating a victory again.

The technical nature of open-wheel racing gives IndyCar ample opportunities for women to advance in roles traditionally filled by men. Shepherd took it a step further this season as the first woman to go over the wall when she was tasked with removing the tear off sheets from the aeroscreen on Palou’s car during pit stops.

All believe they have earned their spots and are far more than symbols of diversity on their respective teams.

?I think we’re here because the team has hired good people for the roles because we’re proving that we can be on cars and win,? Shepherd said. ?I hope what it says about Ganassi is he’s not necessarily trying to be inclusive, but he’s not trying to be disclusive, either. He’s trying to put the right people in the right roles and have the best team possible because he likes winners whether they’re male or female.?

Shepherd started at KV Racing not long after earning an engineering degree from The College of Wooster and found herself in a team debrief with none other than Vasser, co-owner of the now defunct race team.

?The first time you are like, ?I?m in the room with Jimmy Vasser, this is really cool!’ Then you are like ?Shake it off, do your job, it?s fine,’? said Shepherd, who at Ganassi was part of Scott Dixon’s 2018 championship team and is currently a simulation engineer on Palou’s car.

Shepherd and Ashmore both aspire to be lead engineers for an IndyCar team. Ashmore’s journey took her from Purdue with a mechanical engineering degree to a two-year stop at Chrysler and then her break in NASCAR with a position at Roush Fenway Racing.

She never doubted she could do the work, even though she rarely saw women on NASCAR teams.

?It’s pretty obvious when you watch on TV, you can see if there’s people like you or not like you and I don’t know that I had ever seen a woman on the NASCAR broadcast,? Ashmore said. ?But I don’t think I ever really thought twice ? ?Can I do this?? ? because I knew I was really good at math and science and I knew I was going to be a good engineer.”

At Roush, Ashmore said she was on a trajectory to become a crew chief ? the top job on a NASCAR team and one that has never been filled by a woman at the Cup Series level. But she’s realistic and believes Andrea Mueller from Team Penske would be the one to reach that milestone.

Ashmore gave up her NASCAR pursuit two years ago when a data engineer position opened at Ganassi’s open-wheel team and gave her an opportunity to move to Indianapolis and be closer to friends and family. In IndyCar, she doesn’t doubt the chance may come for a woman to lead a team.

Cara Adams spent 18 years working her way through Firestone’s organization and in 2019 was promoted to director of race tire engineering, development and manufacturing for IndyCar’s tire supplier. Adams is credited with creating a welcoming atmosphere for women in the series and the number of females in roles outside of public relations or marketing-type jobs has steadily increased.

?If you look at (Honda Performance), they have a fair number of females and at Ganassi, we have four teams and two female engineers and two males ? that’s 50% and that’s pretty incredible for motorsports,” Ashmore said.

Shepherd said the number of women working on the cars has increased every year and it is “starting to be a real presence.?

Enough of a presence that it’s entirely possible a woman will be in victory lane Sunday for the fourth consecutive IndyCar race.

WATCH: Where Is Adrienne Janic From ?Overhaulin’? Today?