The Denny Hamlin-Chase Elliott feud may not be over, based on this answer from Hamlin 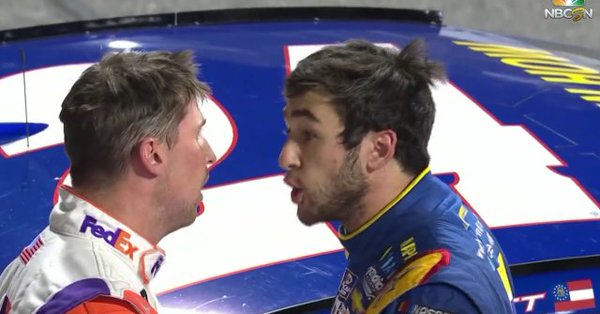 Denny  Hamlin bumps Chase Elliott at Martinsville, and costs him a victory.

Chase Elliott retaliates at Phoenix, and knocks Hamlin out of the race.

If this were baseball, in most cases, if a batter gets hit on purpose, the other team’s pitcher retaliates and that’s it.

Hamlin had a very interesting answer to a question that was posted on the Toyota Racing website. Here’s the exchange:

Question: Does this animosity end here today?
Answer: ?We?re just going to keep racing as hard as we can every week and try to go out there and win Homestead (Miami Speedway) and make sure our competition doesn?t.?

?I?m going to race guys how they race me and keep a smile on my face regardless,? Elliott said.

After Hamlin bumped Elliott, and knocking him out of position as he was on his way to his first career win, Elliott and his team called it a dirty play. His crew chief even hinted retaliation was coming, even as Elliott held his tongue.

No need to do that now.

Hamlin also knew what this was all about.

?Each person has their own opinion of how they do things. It just proves to the people that thought I was a bad guy that he would do the exact same thing in the same circumstances,? Hamlin said on an on-track interview.  ?It?s just part of racing. I got into him and he chose to retaliate. I?m in the garage and that?s the way it is.?

So while there may be a new rivalry brewing, Elliott’s action has another effect — it puts all of NASCAR’s drivers on notice that he will get you back.

?I would like to think (I grew as a race car driver today) ? ,? Elliott said. ?I hope I grow as a person every week and grow as a racer every week. That is something I think everybody tries to do and I try to do better and do my job and came up short again and that is frustrating and I get it.”