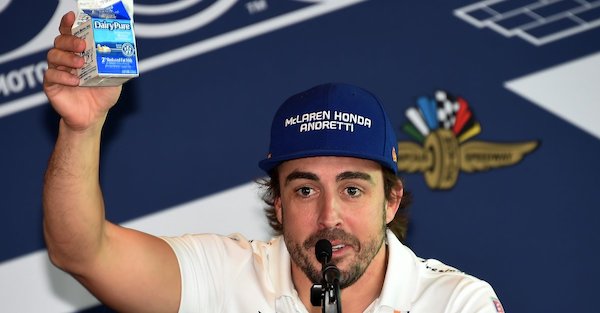 There’s a little bit of tension on the Indy 500 podium. Formula 1 champion Fernando Alonso took the title of Rookie of the Year at the 101st Indianapolis 500. Unfortunately for Alonso, not everyone feels that the title should have fell where it did.

And it is unfortunate, because Alonso raced hard before being struck from the race, thanks to an engine failure. But that’s not stopping fans from saying the the title should have maybe gone to Ed Jones, who finished third in the race. Alonso took 24th, thanks to his engine troubles.

Again, Alonso’s title wasn’t awarded without some merit. He led 27 laps and was holding seventh place, just one behind Jones, when his engine choked.

Don’t lose any sleep over Jones’s lack of a title; the driver took home an amazing $539,629. Which for a few hours work, is a pretty decent wage. Sometimes you win awards, other times you win the money. He probably has no complaints that this time it was the latter.

Related: A sportswriter is in hot water after an idiotic tweet about the Indy 500 winner