A new driver will take over the iconic No. 43 this week at Pocono 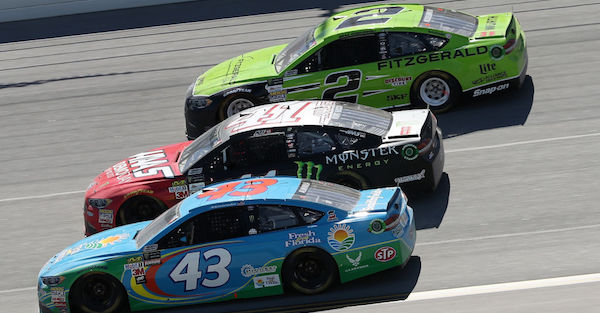 Richard Petty Motorsports has been forced to find a replacement for Aric Almirola after he sustained a back injury during a crash at Kansas Speedway on May 13, and they recently tapped Darrell “Bubba” Wallace Jr. to fill that role.

Wallace has been driving the No. 6 car for Roush Fenway Racing in the NASCAR XFINITY Series, and the 23-year-old will make his Monster Energy NASCAR Cup Series debut at Pocono on Sunday, June 11.

Filling in for @aric_almirola while he recovers is @BubbaWallace starting this weekend at @poconoraceway. #NASCAR https://t.co/0MsKzLKPnR

Roush Fenway Racing is suspending Wallace’s efforts for the NXS series after he races this weekend at Pocono, and Roush team president Steve Newmark said in a statement he is proud of Wallace’s growth and development as a driver.

Wallace is taking over for Regan Smith, who drove the No. 43 car during the last three weeks. Smith tweeted his support for Wallace ahead of his debut on Sunday.

Congrats to @BubbaWallace, it's a great opportunity for him and he's been on fire in @NASCAR_XFINITY the past couple weeks.

Wallace will become the first African-American NASCAR driver in the Cup Series since Bill Lester in 2006. He said in a statement that he is “honored” to drive the No. 43 car.

“Driving the famed 43 car is an unbelievable opportunity for any race car driver,” Wallace said. “With all that Richard Petty has contributed to the sport, I?m honored to start my first Monster Energy NASCAR Cup Series event with this team.

“I?m incredibly grateful that Ford, Richard Petty Motorsports and Smithfield have the confidence in me to help fill the seat until Aric fully recovers, which is the most important piece of this.”

Wallace didn’t record any wins in the NXS series, but he did have 33 top-10 finishes in 83 races over five years.