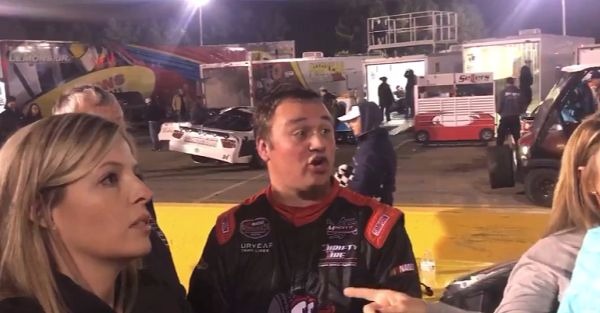 Thanksgiving is supposed to be a time for celebration and peace.

It wasn’t that way at the  Southern National Motorsports Park’s 2017 Thanksgiving Classic, and it left Justin Johnson and his team irate.

On lap 175 of the final Late Model Stock race of the season, the caution flag waved after Brenden Queen and Devin Dodson crashed in turn 4, which required a red flag to temporarily stop the race. Track officials determined that Matt McCall was leading when the caution flag was displayed, but Justin Johnson’s crew disputed this claim. Johnson’s team even showed track owner Michael Diaz a race monitor, which they said proved Johnson was ahead of McCall, according to Short Track Scene.

While McCall ended up winning the race over Johnson by 1.502 seconds, track officials met after the race to determine whether they missed the call that led to McCall taking the lead. After inspecting both cars, it was determined that a transponder was incorrectly placed on McCall’s car and this could have led to incorrect scoring, according to Race 22.

However, Diaz still declared McCall the official race winner, essentially saying that Johnson had time to take back the lead in the last 20 laps, but failed to accomplish that task.

As you might have guessed, Johnson was upset after the race.

?We were clearly in front on the restart, and they gave it to Matt,? Johnson said. ?I led the last 2 laps (prior to the caution), and he didn?t even have a nose in front of me. They?re known for bad calls down here, but I just want to thank my guys for the awesome job they did all weekend, and to Puryear Tank Lines and Mr. Puryear for believing in me. It?s a shame to lose a race not literally on the racetrack, but because of officiating. In this day and time, we have social media, and they could have looked back and made a proper call.?

The victory was McCall’s first in a Late Model car since 2015. In fact, getting behind the wheel of a race car is an oddity for McCall in general, as he usually sits on top of a pit box during NASCAR races where he serves as Jamie McMurray’s crew chief in the Cup Series.