A coal rolling F-250 takes on a Challenger Hellcat 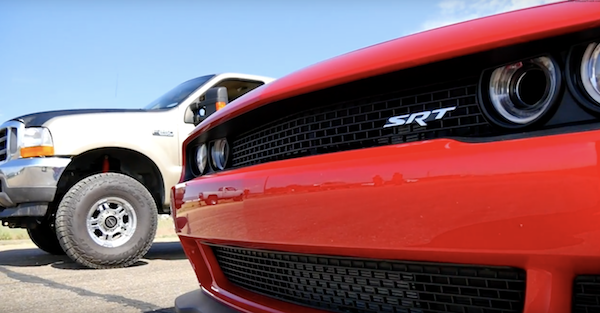 Ever since the Challenger Hellcat came out, everyone wants to see how it stacks up to the competition.  We’ve seen the Mopar take on the Corvette, Camaro, Mustang and the list goes on. But the race we’ve all been dreaming about had never taken place, until now.

That’s right, ladies and gentleman, we now have a Dodge Challenger Hellcat versus a 2000 Ford F-250 Super Duty! We can all die and go to car heaven fully satisfied knowing the outcome of this classic duel.
What we have here is what looks to be a work truck with a 7.3 Power Stroke engine. The owner says:

“It’s got a turbo, injectors, pushrods, headstuds, uh fast fuel system, its got a custom tune, its, its got a little power there.”

Well, a little light on the details but we get the idea. This is a mildly built truck ready to take on anyone and anything.
In the first race, the Hellcat kills this poor truck. The owner claims to have not built up any boost off the line, so he wanted another go. Next run he brake torques it, builds up some boost and takes off on the poor little hellkitty. The Dodge does end up winning, but only by a hair. It was a really short run, but he can totally say, “I almost had you,” Fast and Furious style.
Related: Peterbilt 379 leaves a car behind, choking on diesel exhaust