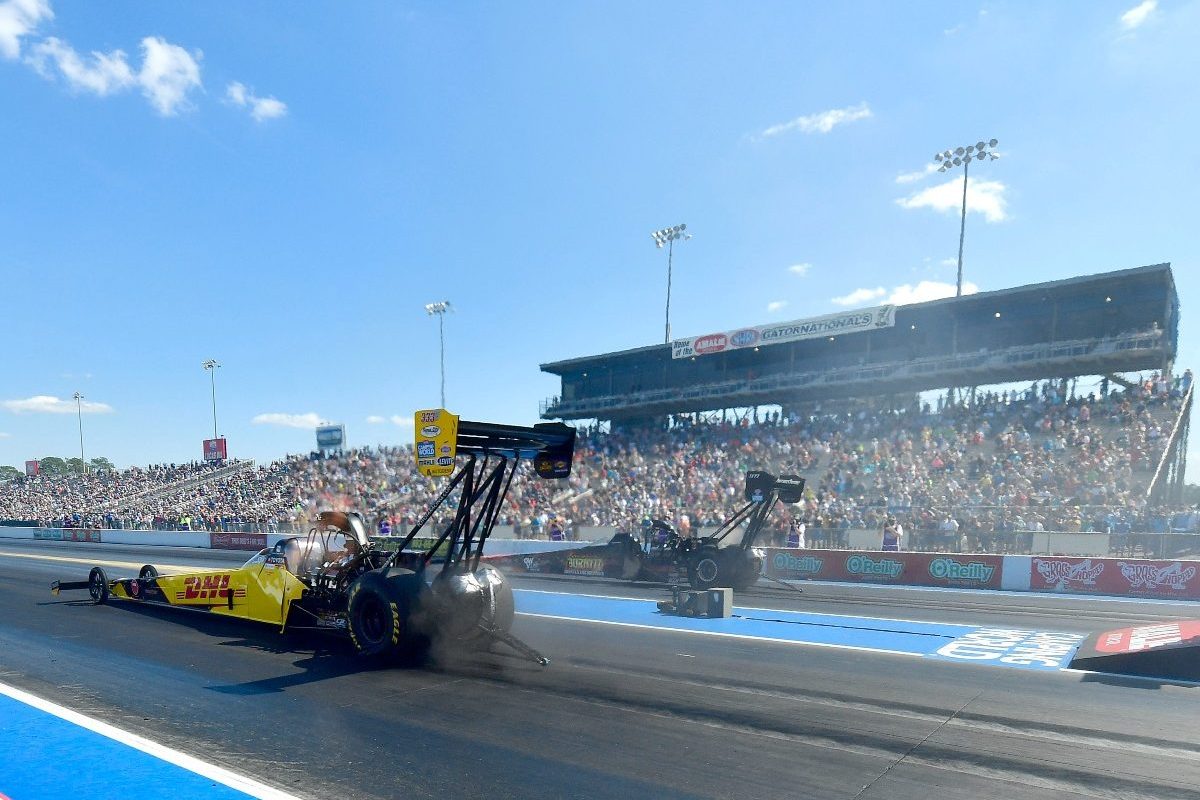 For drag racing fans, there’s a lot to look forward to with the 2022 NHRA schedule. I can smell the race fuel already. And, if you’re into motorsports but have never witnessed the thrill of an NHRA event, this year will be as good as any to dive into the high-octane experience for the first time.

Starting alongside NASCAR’s Daytona 500 in late February, the NHRA season kicks off with the Lucas Oil NHRA Winternationals in Pomona, which is where the season will wrap up about nine months later for the NHRA Finals. In between, there will be national events at tracks all over the United States, from Summit Racing Equipment Motorsports Park in Norwalk, Ohio to the Texas Motorplex in Ennis, Texas to the New England Dragway in Epping, New Hampshire. You’re not going to want to miss any of the action along the way, that’s for sure.

You can check out the full series schedule at NHRA.com, but here, we’re just going to look at four races in particular to keep an eye on.

When fans walk into Gainesville Raceway, they know they’re in for a treat. The same goes for the drivers.

For years, this historic drag strip has defined the top stars in the NHRA. Winning here means big things for the future of a driver’s career. In 2021, it served as the season opener for the NHRA Camping World Drag Racing Series, but in 2022, it’s set to return to its usual position as the third location in the race schedule.

What makes 2022’s event even more exciting is the addition of the NHRA Top Fuel All-Star Shootout. Gainesville already draws in a huge crowd at the Gatornationals as it is, so adding this is the cherry on top. 11,000-horsepower dragsters, eight drivers, and one winner. Things are going to get really interesting that weekend.

Let me put this in perspective. 2021 Funny Car world champ Ron Capps already has four wins here, and you know he’s shooting for another next season. Legendary racer John Force has eight Funny Car wins. You’ve also got Tony Schumacher, who’s already won the Gatornationals five different times, making his return full-time in Top Fuel. Six-time winner Eddie Krawiec will be there competing in Pro Stock Motorcycle, as well. These are only a few of the stars you can expect to see here putting on a show.

The event runs from March 10-13, with qualifying will taking place on both Friday and Saturday and eliminations starting that Sunday. The 53rd annual Amalie Motor Oil NHRA Gatornationals is going to be an epic event, no doubt!

Labor Day weekend marks the start of the Dodge//SRT NHRA U.S. Nationals and the 16th event of the 22-race NHRA schedule.

Now, Lucas Oil Indianapolis Raceway certainly doesn’t have any problems drawing in a crowd, but they decided to sweeten the pot anyway. For 2022, they’ve added in the NHRA Funny Car All-Star Shootout to take place on Sunday. This will feature a race within a race between the eight top-seeded drivers. Oh yeah, and they’re awarding an additional $130,000 in prize money.

Tim Wilkerson put on a show in 2021, bringing home his first Funny Car victory in over five years. Steve Torrence also snagged a victory for Top Fuel, while Erica Enders was the Pro Stock victor. Of course, we can’t forget Eddie Krawiec, who got the top spot in Pro Stock Motorcycle. Each of these drivers will be returning along with a sea of other talented stars looking to make their mark. It’s also the final race in the regular season that drivers are able to qualify for the Countdown to the Championship playoffs.

With so much on the line, you know drivers are going to be giving everything they have. This is one of the biggest and best drag racing events in the season, so you’ll want to grab your tickets while you can. Did I mention that every ticket is also a pit pass? That’s right, you’ll have the opportunity to get meet your favorite drivers and teams, get some autographs, and even snap some pictures with them. Of course, there’s no shame in watching this from the comfort of home, either.

Four-wide racing is all I need to say to promote this one. Drag racing is already intense enough with just two dragsters headed down the track, but an additional two lanes only doubles the explosive action.

The Four-Wide Nationals at Las Vegas Motor Speedway never lets spectators down. It’s the fourth location on the schedule, and one of the most unique racing competitions of the entire season. Not only does it up the ante for competitors, but it ups the danger factor. There’s a lot on the line here, so it pays to be both fast and clean.

April 1st: mark it on your calendars. For those looking to snag tickets, remember that each ticket you purchase will double as a pit pass. Take advantage of the offer and grab one while they’re still available.

As the ninth stop on the 2022 schedule, the NHRA Thunder Valley Nationals at the legendary Bristol Dragway will be wild as usual.

In 2021, they track celebrated the 20th running of the event, during which Mike Salinas managed to achieve the Top Fuel win. Alexis DeJoria won Funny Car, and Greg Stanfield took it home for Super Stock. It was clearly a special honor to win this event during the anniversary, but the action isn’t stopping after 20 years. Things will only get more interesting during 2022 as last year’s winners look to defend their prestigious accomplishments.

Held June 17-19, this event is critical for NHRA drivers as they near the middle of the season. Even if it’s their only win, a victory here can make a driver’s whole year worthwhile. Bristol will always draw in a huge crowd, and that’s for good reason. It’s a historic track that some spectators will continue to attend year after year. If you’ve never been, put it on the bucket list and you won’t regret it.