NASCAR could learn a thing or two from this racing series 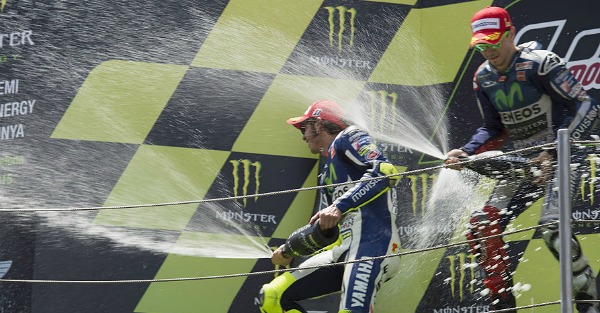 Mirco Lazzari gp / Getty Images
MONTMELO, SPAIN - JUNE 14: Valentino Rossi of Italy and Jorge Lorenzo of Spain (L) and Movistar Yamaha MotoGP celebrate with champagne on the podium at th end of the MotoGP race during the MotoGp of Catalunya at Circuit de Catalunya on June 14, 2015 in Montmelo, Spain. (Photo by Mirco Lazzari gp/Getty Images)

NASCAR is in a ratings slide. They have tried everything: playoffs, complicated point systems and three-part races. No matter what they do to improve the sport, they always seem to make things worse.

However, even with the bosses seemingly trying to intentionally sabotage their own product, NASCAR is still the most popular motorsport in America. But here?s a dirty little secret: there is much better racing out there.

While NASCAR is used to the tired jokes accusing the drivers of only knowing how to turn left, the issue is much deeper than the shape of the track. For my money, I say MotoGP is the perfect racing series. The premier motorcycle racing series couldn?t be more different from NASCAR but retains the best aspects.

The edge of your seat battles for position, the ever-present threat of a crash and the rivalries all exist in both. The main difference? Race length. While a NASCAR race can easily take up to four hours, the typical MotoGP race comes in under an hour. You may only get an hour of racing, but because of the condensed nature, it is nonstop action.

Another cool aspect of MotoGP is that there are discernable differences between the bikes, with different manufacturers having distinct advantages in different parts of the track. This adds to the exciting back and forth battles. For example, the final laps of the 2017 Qatar Gran Prix saw Maverick Vinales? nimble Yamaha repeatedly lose the lead to Andrea Dovizioso?s Ducati in the straights, only to regain the lead in the corners on his way to a first place finish.

These battles add to the rivalries and there is no lack of star power: The legendary Valentino Rossi rides for Yamaha and defies father time by pushing riders over a decade his junior. Mark Marquez has won three championships in four years for Honda. Jorge Lorenzo has moved to Ducati after winning three championships himself on a Yamaha. In addition to the stars, there are young riders advancing every year who seemingly come from nowhere to challenge the top guys.

So the racing is intense, but you can?t beat the spectacle of ?The big one? in NASCAR. Huge muli-car crashes spark that primitive part of our brain that loves mayhem. While you will still need to check the NASCAR recaps for your pile-up fix, MotoGP has a strange relationship with crashes. Because the riders are exposed, you are much more aware of how scary a crash can be, and because the riders only have two thin strips of rubber connecting them to the road, the possibility of a crash is ever present. This causes a strange, exciting anxiousness that something could go wrong at any minute. Every second they remain upright reminds you of the extreme skill level of the riders.

Because of the constant threat of a crash or smaller mistake and the nature of motorcycle racing, no lead is ever safe. These factors combine to make the entire race edge-of-your-seat exciting. The biggest downfall to the series is accessibility. MotoGP is only shown on the fringe channel beIN Sports and races are held all over the world, making for the occasional inconvenient start time in America.

However, if you can find a way to wake up early enough and watch on Sundays, you will not be disappointed. Heck, with such a short race, you?ll still have plenty of time for NASCAR too.