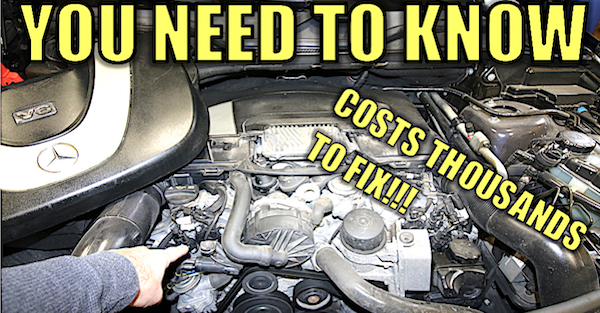 You’ve probably heard the car buying advise never to buy the first model year. The idea is that the car company hasn’t had time to work out the bugs, so its best to wait until the 2nd or 3rd year of a new body-style, so you don’t get stuck with a lemon.

In my latest video on the LegitStreetCar YouTube channel, I highlight this exact point by showing you a Mercedes Model that early on had some serious engine issues. I feature a 2007 ML350 in the video, but Mercedes used this same dual over-head cam V6 engine in almost every model they made from 2006-2012. This engine also came in V8 form which had an almost identical issue.

The problem on the V6 was with a part called a balance shaft. Its a shaft with a gear on it that is driven by the timing chain. Its there to help with engine vibration, and the issue was with the material used for the gear. The metal was weak which caused the teeth on the gear to wear down. When this occurred the timing chain would become loose, and change the timing of the engine. This engine has variable valve timing, so it was especially sensitive to any changes in cam timing. The V8 engine had the same issue except it didn’t have a shaft attached to the gear. The V8 is inherently a smoother running engine and didn’t require the shaft for balancing purposes. This issue will illuminate the check engine light, and the engine can run rough if the gear is severely worn. You also don’t want a bunch of metal swimming around in your oil.

At the dealer, this repair can cost anywhere from $5,000-$7,000 as the entire engine needs to be removed on most models. Mercedes did upgrade the material used for the gear after the first model year and thus corrected the problem. In the video description, I included the factory bulletin listing the engine serial numbers so you can make sure your car, or a potential used car you want to buy doesn’t have the problem. There was a class action lawsuit a few years ago, so some received this repair at a discount. I listed that information as well but most cars are out of the extended warranty coverage time frame.

It’s always important to get a pre-purchase inspection before buying any used car but especially a first model year. Good luck out there, you’re going to need it.