Bring back the Buick Grand National and take my money! 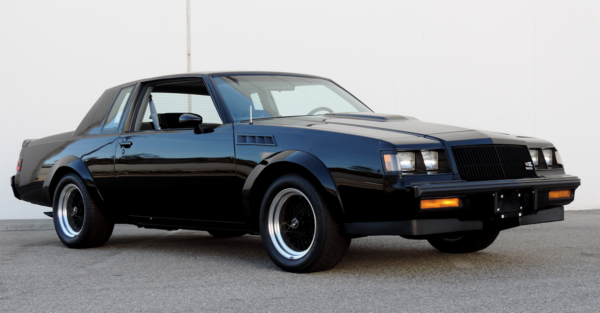 This month, Buick revealed the new Regal lineup.  The next generation Regal will be available in two body styles.  The ?Sportback? which is a four-door hatchback and the ?TourX.?  The latter of the two being a wagon they are calling a crossover.  I suspect the marketing department had something to do with that designation due to American’s distaste of wagons in general. It is the first wagon for Buick since the good ol’ Roadmaster.

Now these new Regals are all fine and dandy, but I?ve had enough.  GM, Buick, please bring back the Grand National!

Normally, people are hesitant to throw their support behind a retro comeback, and with good reason.  I think we can all agree bringing back the Grand National in anything other than its purest form would do the original an injustice.  I definitely don?t want to see it go the way of the 04-06 GTO.

There is a great case currently for a legit comeback that would have GN fans lined up at their local Buick dealer cash and credit in hand.  Let?s get into the details.

At the time of the originals, the turbo-charged six cylinder was definitely an odd ball engine.  Remember, this is the 80s and most cars of this nature had two things in common:  Their engines had eight cylinders and breathed unassisted.

Considering the GN?s performance success back then, recreating that original aspect of the car today is a no-brainer.  Smaller boosted engines have become very popular, not only for fuel economy and emission standards, but performance as well.  Look at the new Ford GT and Raptor both using Twin Turbo V6 engines.  Lets not forget ?Godzilla,? Nissan?s successful GT-R and its own Turbo Six-cylinder.  This list goes on with a slew of European cars and even Mustangs and Camaros. GM has options when it comes to six- cylinders, but it my mind there is only one.  Use the new LT4 engine minus two cylinders and plus one turbo charger.  Keep it pushrod but modern and most importantly true to what we are used to seeing in a real GN.

Next is figuring out what platform the new GN would use. Currently the Regal uses the Epsilon II.  This wouldn?t work as it was made for front-wheel drive and all-wheel drive.

No worries though, as GM has an excellent platform available today and that?s the Alpha. This is being used with the current generation CTS, ATS and 6th Gen Camaro. It’s lightweight, supports rear-wheel drive and has proven very successful especially with the high performance Cadillac V-series cars along with the SS and Zl1 Camaro.

Transmission options, suspension, steering, rear ends can all be sourced from the lofty GM parts bins primarily coming from the aforementioned Alpha cars.

Interestingly, GM has filed for trademarks on the name ?Grand National? and ?GNX.?  This was done a couple years ago now but these things take time and it?s nice to know it?s being discussed.  For all we know, they are waiting for the right time to strike and I believe that would be soon.

There is one familiar issue I foresee if they were to come out.  How would it compare to other performance offerings within the company? After the addition of the intercooler in 1986, General Motors put themselves in a little pickle. A Buick was now faster than their Camaro and Firebird. The GN also came a little to close the almighty Corvette of the same year.  Where would the GN?s place be in the hierarchy of GM performance?  I definitely consider this a good problem to have and no doubt the marketing team would figure it out.  They could just do what they did last time and underrate the cars, giving us plenty of room to improve on performance after the sale.

Imagine retro Grand Nationals done right to today?s performance level.  True to the originals. Down to the two-tone seats with the Turbo 6 headrests. Tell me you’re excited. Better yet, tell GM.  They could make this thing happen right now.  The timing couldn?t be better with the generation who grew up adoring these cars now well into adulthood.

I?ve always told people not to buy a brand-new car but, mark my words, if they make a new GN, I will be first in line.

Related: These guys got twin Grand National barn finds for a quarter of the asking price