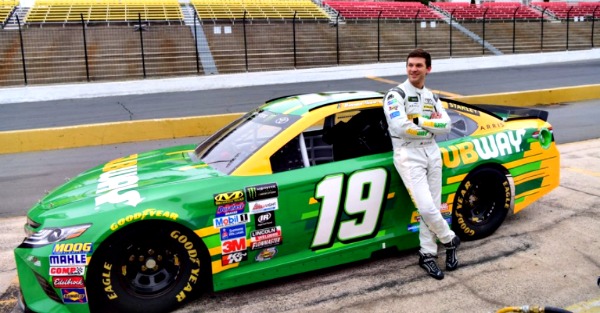 Ever since Subway cryptically announced it was suddenly terminating its Daniel Suarez sponsorship for “reasons beyond our control,” news has slowly leaked — like the painful drip from a leaky faucet — about the reason the sandwich giant made that move.

And the reason has been met with howls of protest from NASCAR fans and pundits who can’t believe this whole thing is over donuts.

Dunkin’ Donuts, to be specific.

Suarez participated in a lighthearted skit for NBC in which he drove around in a golf cart giving out donuts. That infuriated Subway — seeing one of its sponsored drivers promoting a competitor — and Subway pulled the sponsorship.

First, lets acknowledge that Subway certainly has the right to pull its sponsorship given that Suarez — even innocently — promoted a competitor’s product. There’s a reason you don’t see Pepsi products at Coca-Cola races — it’s sponsored by Coke. Period. It doesn’t matter that Subway and Dunkin’ Donuts aren’t exactly apples to apples because the  products only have very slight overlaps. From a marketing perspective, promoting another product over the one you’re sponsored to promote is a cardinal sin.

As a result, Subway acted.

But this is a classic example of doing what you can do isn’t always the right move, and why Subway, or its parent company, need better marketing advice. Here’s why:

It was an innocent skit

Suarez driving around in a cart handing out donuts — an item Subway doesn’t even serve — while fans are having fun is exactly what NASCAR and it’s broadcast partner, NBC, are after. In an era of declining viewership, every sponsor needs as much good news as it can get. Everyone recognizes what it was — good fun. Everyone, that is, except Subway. NASCAR fans can’t understand why Subway has decided to punish fun.

Why is this such a big deal now? NBC has removed the original video, but Adam Stern of the Sports Business Journal added a screen shot to Twitter. Look at the time stamp:

This happened on July 16! Suarez said he found out on Sept. 1 that Subway was dropping him. Why wait so long? What other donuts offense happened in the intervening six weeks? Did it take that long for Subway to come up a flawed response?

Fans are linking the two:

My bunky told me Subway cancelled Daniel Suarez's sponsorship for handing out donuts. Idiot.
/s/ Jared F. appearing on To Catch A Predator

Subway should know that the Fogle affair is still a gigantic black eye, and fans are going to link the two — especially when a driver as well liked as Suarez is involved.  Granted, the argument — you stood by a child molester and dumped a driver for giving out donuts — isn’t fair. But neither is life, or emotions, and Subway should have recognized what an emotional issue this is.

The whole thing has been poorly handled

I’d love to know who in the company thought pulling a sponsorship from a popular driver because he gave out a few donuts was a smart idea?

Again, there are some things you can do that aren’t smart to do. This falls into the category. Subway only had once race left in the sponsorship deal. It could have simply let it lapse, as other companies have done. It could have said that while it has enjoyed its association with Suarez and Joe Gibbs Racing, it’s examining the NASCAR landscape to determine how to best use its sponsorship money — and that certainly could include JGR.

Instead, it handed the situation with the grace of a brick slamming through a plate glass window, to the point Subway has NASCAR legends weighing in.

NASCAR fans have more than long memories — they have money. Unless Subway makes this right — fast — they’ll find they lose some.