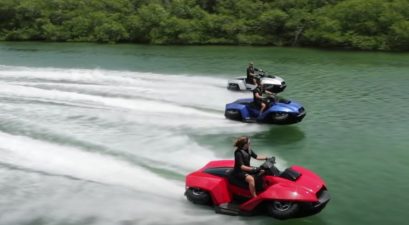 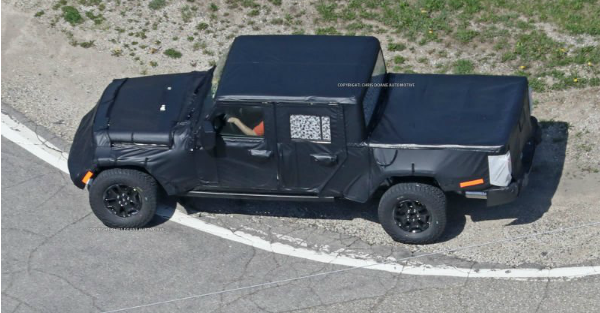 The long awaited Jeep Wrangler pickup truck has been announced, teased and delayed. Now it has been spied. These shots of the truck covered in camouflage are not only proof that Jeep finally looks on target to bring the truck to market. There have been spy shots before, but the finish on this truck looks far closer to production ready, and there are a few things these spy shots show us.

First, most of the renders done by enthusiasts speculated that the truck would be an extended cab configuration with smaller rear doors, but the spied Jeep has a full crew cab with four full sized doors. There could be different options but this does bode well for the truck in terms of sales. However you feel about four door Wranglers, the things sell.

Second, this truck looks big. The wheelbase looks similar to the current Wrangler Unlimited, already large to Jeep’s standards, but has much more rear overhang to accommodate the four doors and still have a usable bed.

In a Detroit News interview, Jeep head Mike Manly announced that the Jeep truck was coming in late 2019. He also said that, while the truck doesn?t yet have a name, historic Jeep names are being considered. Whatever they settle on, we hope they think it through more than the cringe-worthy ?Comanche Eliminator? name given to the pickup last produced in 1992.

Originally slated for a fourth quarter release in 2018, the Wrangler pickup will replace both the Jeep Compass and Jeep Patriot. With an estimated MSRP starting around $30,000, the Wrangler pickup is comparably priced against similar mid-size trucks like the Honda Ridgeline, Chevy Colorado, and Toyota Tacoma. FCA confirmed that they had invested $1 billion to breath new life into the Warren Truck Assembly Plant in Michigan to construct the all new Wagoneer and Grand Wagoneer while the Toledo Assembly Complex in Ohio will be used to build the new pickups. The Wrangler is rumored to feature a 3.6L V-6, 2.0L turbo four, and possibly a diesel model as well.

You can see the rest of the spy shots at Jalopnik.