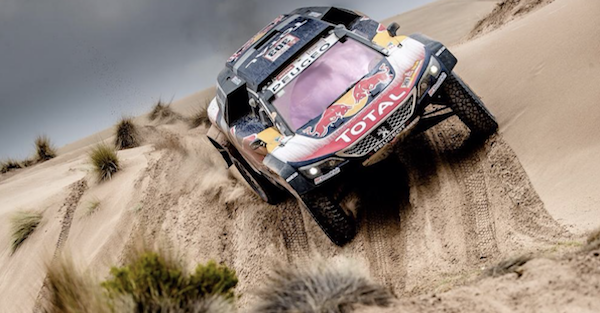 Racing can be a dirty sport. Some racers will get away with a little love tap here and there, but rarely is there a question of whether or not the accident even occurred. Reuters reported on Monday that Carlos Sainz, who led the Dakar Rally Car class, was given a 10-minute penalty for hitting Kees Koolen without stopping to check if he was ok. Dakar rules state that competitors that see an incident must stop to help those involved.

“There are times when I can have some doubts, I know for sure that I didn’t hit any quads,” said Sainz.

“It was a very muddy area. I warned him with the sentinel, and I saw that he saw me and that he went off the road. I accelerated, and when I did, I noticed he lost control because there was a lot of mud. Then he came back onto the road, and I miraculously avoided him. I was very close, but I didn’t touch him.”

“I gave my version, and he gave his. My car doesn’t have any impacts, and neither does his quad.

“If I had hit him with the car, I’d destroy the quad, and we’d be discussing something more serious.

Koolen, on the other hand, was adamant that Sainz hit him and said he would take legal action if this wasn’t resolved. He said this according to autosport.com:

“I think if I would be dead, it would have been a lot easier for Peugeot and Carlos because then I wouldn’t be able to talk anymore.”

Koolen went on saying there was damage on his quad and that he could prove it because he saved all the damaged parts. Luckily, Koolen won’t need to do anything because the penalty was just dropped after Dakar stewards reviewed the telemetry from Sainz’s 3008DKR Maxi and other relevant information. According to motorsports.com:

“The telemetry does not show any crashes,” said Peugeot Sports boss Bruno Famin. “Maybe a brush, but nothing like an impact. The accelerometer didn’t register it, just as Carlos hadn’t.”

“In the telemetry, you can see Carlos follows the quad during 12 seconds at 50km/h, and when the quad loses control, he brakes again to 37km/h. It is clear that Carlos braked hard and turned the steering wheel sharply to avoid the quad.”

“I’ve read some statements from the quad rider. I think Carlos’ behavior in this incident was perfect and the quad rider should thank Carlos for having avoided him. These are the facts.”

“It’s a matter of common sense. We are very happy that the stewards analyzed the facts and looked at the dossier again to reconsider their decision.”

“We are happy that they canceled the penalty since two days ago they didn’t have all the data to make the decision. They’ve done a good analysis.”

It will be interesting to see if Koolen tries to come back with proof or evidence to the contrary, but with the penalty removed, Sainz has a commanding lead of 1 hour and 45 seconds in general classification.

Related: Dakar Racer Eats It, Walks It Off