As sponsorship dwindles, NASCAR drivers are looking at smaller salaries and pay cuts 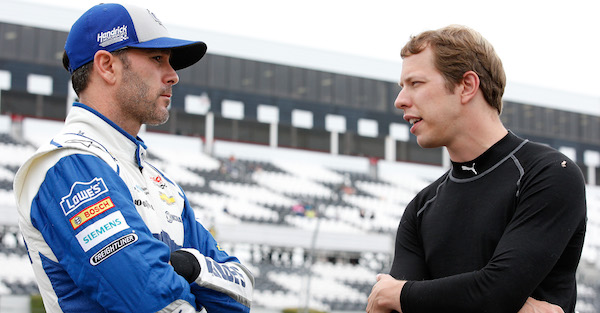 It’s no secret that NASCAR is undergoing a seismic financial change. Sponsorship are harder to come by, and likely Hall of Fame Drivers like Matt Kenseth are being force into retirement because they can’t find rides.

Adam Stern of the Sports Business Journal (subscription required) dug deep into new reality facing drivers, but gave those without a subscription a peak at what he wrote.

What became obvious is that teams face a possible snowball effect that could impact the product they put on the track.

NASCAR doesn’t release driver salaries, but it’s been widely reported that top Cup series drivers can make up to $10 million a year, when accounting for base salaries, and a share of sponsorship money and race winnings. But the influx of newer, younger drivers has really driven down base salaries to about $500,000 a year.

Not only are the salaries lower, but veteran driver face pay cuts, Stern reported.

Top drivers who have retained full sponsorship (the likes of @JimmieJohnson, @dennyhamlin and @joeylogano) can still earn peak salaries, but new drivers coming into top rides in the premier series will get smaller base salaries while veterans absent sponsorship face salary cuts.

In the report, Brad Keselowski talked about how sponsor expectations are changing:

?The traditional argument used to be that drivers have fans and star power, and more often than not, a driver?s star power can help you secure a top brand, which will raise your revenue,? Keselowski said. ?But at this point in time, driver star power is not moving the needle because the specific request from the sponsorship market is for direct ROIs.?

As NASCAR teams adjust to lower sponsorship revenue, many drivers are feeling the pinch in their salaries.

According to Brad @Keselowski, part of the reason is that "driver star power is not moving the needle" like it used to amid shifts in the sport —

Now, most fans aren’t going to shed tears because drivers you are barely old enough (or who aren’t old enough) to legally buy a drink will have to suffer along at $500,000 a year or more — especially when those same fans are complaining about the cost of attending a race.

But the salary cuts and the financial issues portend far larger issues that could snowball and further hurt a sport already seeing an exodus of its biggest names, declining TV ratings, and additional competition from Formula 1.

For example, will teams be forced into layoffs, or will they have to hire less experienced — and cheaper — crews? While the drivers are clearly important, you can’t cut from the garage too deep because that impact the way a car runs.

Will there be a shortage of opportunities in lower levels because the money just isn’t there? We got a glimpse of that this year when Brad Keselowski announced he was shuttering his BK Racing truck series team, in part, because of a lack of funds.

For now, all of these are questions, but it’s clear finances are going to be a major story in NASCAR in 2018 — and most likely, beyond.