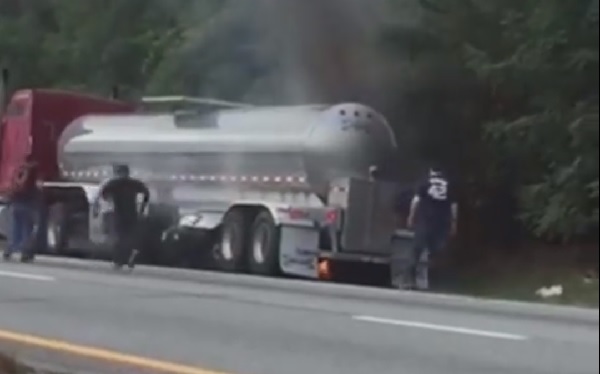 Strangers risking their own lives to save an elderly couple from a burning car. It?s dramatic video posted by ABC and reported by the drive.com.

Carmin and Alejandro Rivera were driving through a small town an hour north of New York City on Sunday when a tire on their Subaru Forester blew. The car went into a spin and slammed underneath a parked tanker truck. The force of the collision caused the car to catch on fire, that?s when people started running towards the car.

“Everybody just ran across the highway, even with flames coming out of the gas tank from the car,” witness Jackie Welch told WABC. “Nobody knew if it was going to blow up, or if it was a fuel tanker, and nobody cared.”

People crawled under the tanker to where the car was wedged, trying to help the Riveras out before there was a possible explosion. Turns out that the tanker was carrying liquid sugar, but none of the rescuers knew that. Just after they pulled the Rivera?s from the wreckage, witnesses say the gas tank on the Forester exploded.

The Riveras were hospitalized with serious injuries including head trauma and broken bones, but thankful to those strangers to be alive.