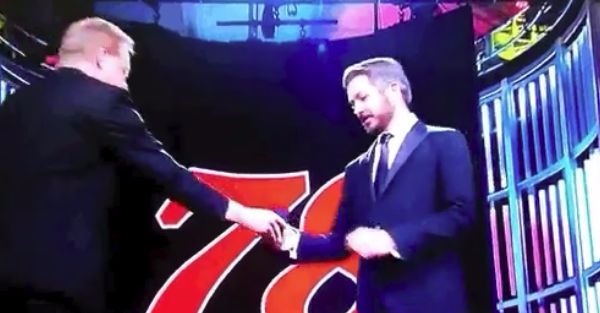 In 2017, he won eight races, had 26 top-10 finishes, and captured his first Cup Series championship. As a reward, the veteran driver was honored during the Monster Energy NASCAR Cup Series Awards ceremony in Las Vegas.

There was just one quirk, though.

When it came time for NASCAR Chairman and CEO Brian France to introduce NASCAR’s newest champion, he quickly turned around, handed the ring to Truex, and then walked away, without so much as a handshake.

With an obvious look of shock on his face, it looks like Truex mouthed, “What the heck?”

While that moment was certainly awkward, it wasn’t the only inelegant moment that came from France during the awards. While presenting the Bill France Award for Excellence to Dale Earnhardt Jr., which is an award obviously named after France’s father, he gave a very brief speech, essentially saying that award is not given out every year, but Dale Jr. was deserving based on what he’s done for the sport on and off the track.

However, any sentimental value was lost when France ran off the stage as soon as his speech was over. He did shake Dale Jr.’s hand, though, albeit very quickly.

Brian France at least shook Dale Earnhardt Jr.’s hand when presenting him with an award named after France’s father.

But he almost sprinted off the damn stage. pic.twitter.com/vmYzkNnWzk

France has been a polarizing figure in the NASCAR world since taking over his current position in 2003. During his tenure, NASCAR has implemented its playoff system, as well as newly designed cars and stage racing, but his sometimes emotionless approach to human interaction have left some people feeling jaded.

Just take a look at Truex’s face when France doesn’t even attempt to shake his hand.